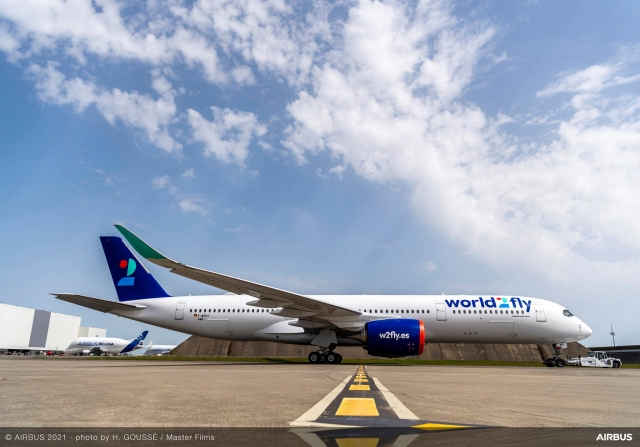 On 2 April, the first A350-900 for World2Fly was rolled-out of the hangar at Toulouse-Blagnac, featuring the airline's livery. The aircraft, wearing test registration F-WZHI (448) will become EC-NOI and is expected to be delivered in May. It was previously destined for Aeroflot (as VP-BXS, but not taken-up) and will be leased via ALC.

The A350 joins the airline's single A330-300 EC-LXR (1097), which was delivered to Palma de Mallorca on 26 February. World2Fly, which is tour-operator Iberostar's own airline, hopes to receive its AOC in April and launch flights in June. The A350-900 will fly out of Madrid-Barajas to Cancun, Punta Cana and Varadero. The A330-300 will be based in Lisbon as of July and will fly to the same destinations. World2Fly has also applied for a Portuguese AOC, so expect the A330 to be getting a new registration soon.

A second A350-900 has also been secured via ALC and is due to arrive in May 2022. This aircraft is also planned to be based at Lisbon.