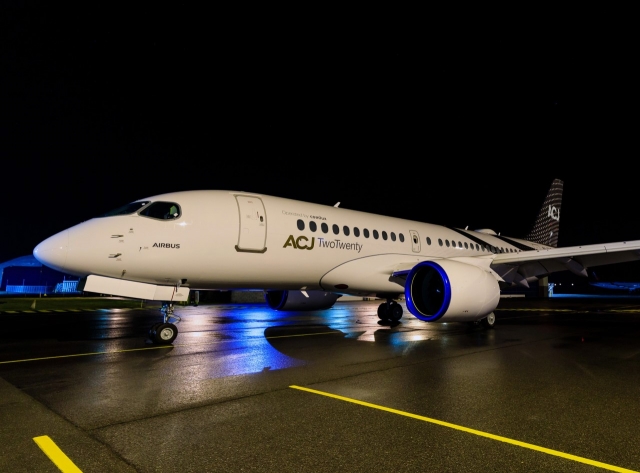 Meanwhile at the Airbus-plant at Mirabel near Montreal in Canada, the very first ACJ220, or ACJ TwoTwenty as the manufacturer calls it, has been rolled-out of the paintshop. The aircraft, currently wearing test-registration C-FTWU (50062) is wearing small "operated by Comlux" above the windows.

Comlux is the launch customer of Airbus' newest corporate jet and has announced an order for two aircraft. The company also signed an agreement with Airbus that it will be the exclusive cabin outfitter for the first fifteen ACJ220s.

During the recent Dubai Air Show, Comlux Aviation announced that it has signed an agreement with FIVE Hotel in Dubai, which it will operate its first ACJ220 for. Once cabin outfitting is finished, the aircraft will be registered 9H-FIVE. Delivery is planned for 2023.

The ACJ TwoTwenty is based on the A220-100 and will be able to fly up to eighteen passengers very comfortably over a maximum distance of 10,500 km, which is just over twelve flying hours. This means the jet can connect cities as London with Los Angeles (CA) or Dubai with Tokyo.