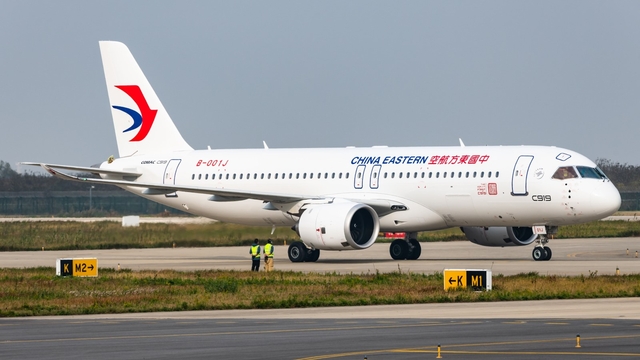 COMAC is closing in on delivering its first C919 to launch customer China Eastern Airlines. The first production aircraft, currently registered B-001J (107), has been painted in the airline's-livery and is undergoing final pre-delivery checks at the manufacturer's site at Shanghai-Pudong. Delivery is expected to take place before the end of this year and entry into service early 2023. It will be re-registered into B-919A in airline-service.

China Eastern Airlines has ordered a total of 20 C919s and will be the first airline to welcome the type. The airline expects to take delivery of four C919s by the end of next year. In total, COMAC is reporting that it has logged alsmost 1,000 orders for the aircraft.

The C919 flew for the first time on 5 May 2017 and was certified by the Chinese Civil Aviation Authority on 29 September 2022. The manufacturer is still in the process of obtaining certification from major other civil aviation authorities like the FAA and EASA. Without this, the C919 will be limited to only operate within China or to close Chinese allies.

Development of the 168-seat aircraft began in 2008 and is China's attempt to compete with the Airbus A320neo and Boeing B737MAX. The C919 is powered by either CFM Leap- or ACAE CJ-1000 engines and also utilises many Western avionics. This also impacted the development process as the US has increased sanctions on several of these technologies over the last few years.

Photo via the Chinese Embassy in Switzerland on Twitter.