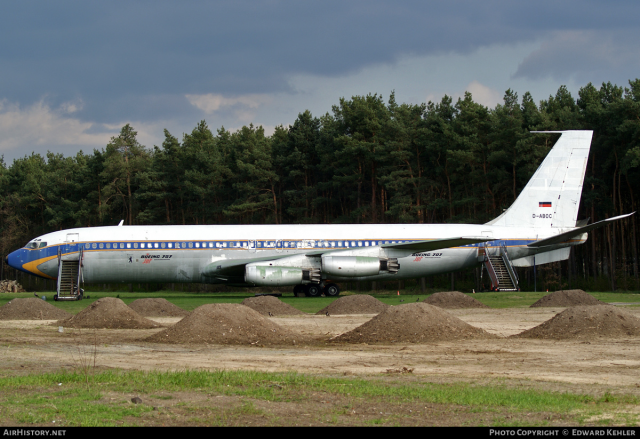 Another German B707 to be scrapped

Earlier today we reported about the upcoming scrapping of a former Lufthansa B707 at Hamburg Airport. Unfortunately, that's not the end of the bad news, as it has also become clear that the B707 at Berlin-Tegel will also be scrapped.

This particular aircraft, a B707-458 (18071) was originally delivered to El Al in June 1961 as 4X-ATB. On 6 September 1970 it was lightly damaged during a hijacking incident, but was repaired and flew in Israel with El Al and Arkia until 6 July 1986. It then moved to Boeing as N32824 on 2 September 1986 and re-registered a month later as N130KR. Originally, the plan was to use the airframe for the KC-135 programme, but Boeing decided to donate the aircraft to the Berlin Technikmuseum to celebrate the 750th birthday of Berlin. It was put on display at a roundabout at Berlin-Tegel in Lufthansa-livery with the fake registration D-ABOC. Unfortunately, maintaining the aircraft was not the highest priority so around 2000 it was moved to the grounds of the airport itself and used as a fire trainer.