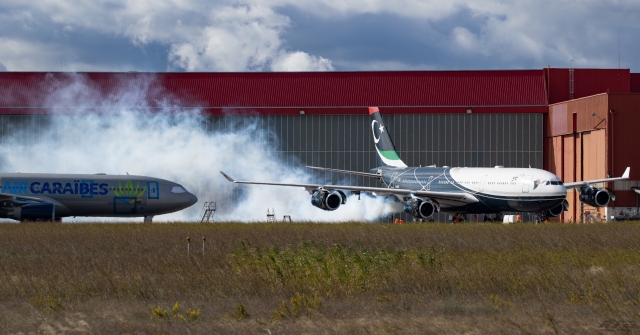 Libya One to return to service?

After being in storage for more than six years at Perpignan, Libya's A340-200 5A-ONE was brought back to live on 14 October by having its engines started. It made for an interesting picture. It's unknown if the plane will go back into service, but when it does it will be one of the few remaining flying A340-200.

5A-ONE is c/n 151 and was first flown by Airbus in July 1996 as F-WWJY. On 11 October 1996, it was delivered to the Royal Brunei Sultan Flight as V8-JBB, which operated it for four years. In March 2000 it moved to Saudi Arabia to fly as HZ-WBT4 for Kingdom Holdings. Between October 2004 and January 2005, it was temporarily registered as D-AIWY by Airbus as the plane went through cabin modifications at Hamburg. On 10 November 2006, it moved to Libya as 5A-ONE where it was first operated by Afriqiyah Airways and as of 2013 by the government.