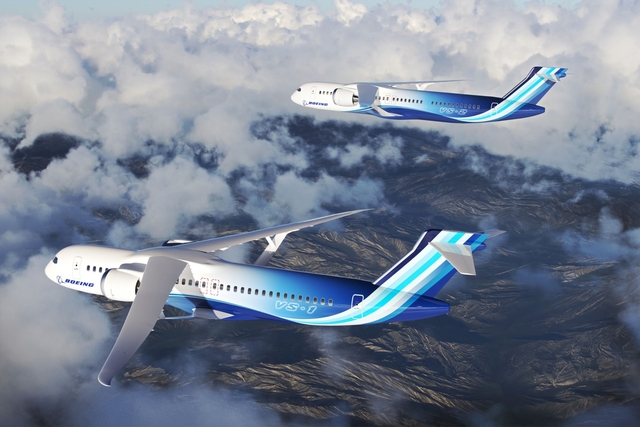 On 18 January, the NASA announced it has selected Boeing to develop a full-sized experimental Sustainable Flight Demonstrator which both organizations will use to test and validate its jointly designed Transonic Truss-Braced Wing (TTBW) concept. Work on this low-drag wing has been ongoing for years and will now be put to the test in a real aircraft planned to fly in 2028 from NASA's Armstrong Flight Research Center at Edwards Air Force Base (CA). The full-sized demonstrator Boeing will develop is essentially going to be a shortened MD-90 fuselage with new wings attached.

In the press-release of Boeing, the manufacturer also showed the world renderings of how a family of two single-aisled TTBWs could look like. The concepts are dubbed Vision Systems VS-1 and VS-2. The VS-1 would be an aircraft to seat up to 160 passengers, while the VS-2 would be a TTBW for up to 210 passengers. Compared to the Boeing B737 narrowbody aircraft today, the VS-1 and VS-2 would not only have a different fuselage length but also a different engine and wing to secure optimal performance.

Although Boeing hasn't said the TTBW will be the future for its new narrowbody aircraft, the manufacturer is confident in the technology. Since 2008, it has already spent 110 million US Dollars on the project and will at least spent another 725 million USD. NASA is pitching in 425 million USD of funding. If the project is succesful, Boeing estimates the technology could be used for a new family of aircraft ready for commercial service by 2035-2040.

The Sustainable Flight Demonstrator is part of NASA's Subsonic Ultra Green Research (SUGAR)-program that aims to help aviation achieve its goal of reaching net-zero emissions by 2050.