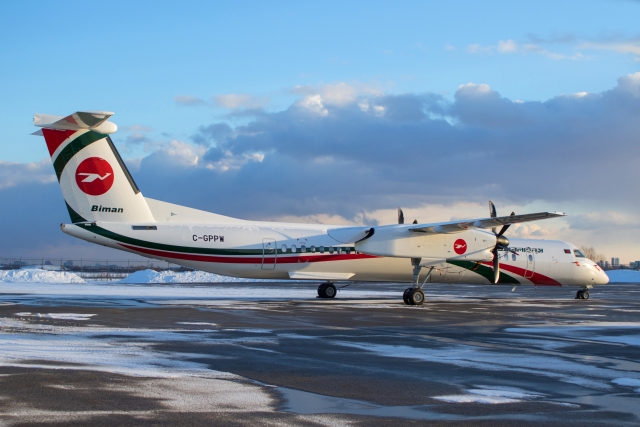 Biman Bangladesh Airlines second new DHC-8-400 departed Toronto on delivery on 20 February. DHC-8-402 S2-AKE (4625) is named Akaashtori and departed Toronto Pearson International on 21 February enroute via Goose Bay, and Keflavik using its Canadian test registration C-GPPW. It proceeded to Rotterdam and beyond the next day.  The third DHC-8-400 for Biman, c/n 4627 S2-AKF named Shwetbalaka made its first flight on February 9th with test registration C-GPRD.  Delivery of that one is also imminent.

The purchase agreement for three brand new 74 seat DHC-8-400s for Biman Bangladesh Airlines Ltd. with the Canadian Commercial Corporation was announced by Bombardier Commercial Aircraft on 10 September 2018.  Based on the list price of the Q400 aircraft, the firm order is valued at approximately US$106 million. The change of ownership of the production of the Q400 from Bombardier to deHavilland Aircraft of Canada in June 2019 would see the aircraft built at the Downsview plant under the new corporate identity and the rebranding back to the original DHC-8-400 moniker. Delivery plans are for two to arrive in late 2020 and one in 2021.  These dates were pushed back slightly due to precautionary COVID-19 production delays at the Downsview plant.

Biman currently operates two dry-leased secondhand DHC-8-400s. S2-AGR c/n 4368 was SU-SMI with Smart Aviation Company (SME) of Egypt from September 2011 before lease to Biman in April 2015. S2-AJW c/n 4208 was originally operated for United Express as N208WQ. It was built for Colgan Air (9L/CJC) in May 2008 and was transferred to Republic Airlines in September 2012. It was stored in Tucson in January 2015 and moved to Toronto Lester B Pearson International Airport in June 2017 before joining Biman in August 2018. A third Q400, S2-AGQ c/n 4367 was written off in a runway excursion crash at Yangon International Airport, Myanmar (RGN) on 8 May 2019. It was formerly SU-SMH with Smart from September 2011 before being leased to Biman in April 2015. One of the leased secondhand aircraft is slated to be returned to the lessor in 2020 as the first of the new dash-8-400s comes on line.

The new DHC-8-400s will allow expansion of Biman's domestic routes and frequencies and expand tourist destinations. Biman currently operates some long-haul aircraft on domestic routes due to shortage of short-haul planes, said Biman's Managing Director and Chief Executive Officer of Biman,  MD Mokabbir Hossain. "After the inclusion of the new DHC-8 aircraft, we will stop using Boeing 737 planes on domestic routes". Biman plans to expand to cover some domestic routes it currently does not operate, in hopes of reducing competition by private carriers Novoair and US-Bangla Airlines. Biman also plans to use DHC-8 aircraft on some international routes like Chattogram to Bangkok.

“Our DHC-8-400 aircraft’s excellent economics and passenger environment have allowed us to offer high-frequency services within Bangladesh and neighboring countries over the last five years and we look forward to the increased operational flexibility that our new aircraft will provide for our fleet,” said Hossain, Managing Director. “The combination of our DHC-8-400 turboprops and our narrow body jets improves our overall network efficiency, connectivity and, ultimately, our system profitability. Furthermore, during the ongoing pandemic, we have found that the role of our DHC-8-400 aircraft is even more important as we see gradual traffic recovery after the lockdown.”

“The DHC-8-400 aircraft’s turboprop economics and jet-like performance have proven to be an ideal match for Biman’s network of short, domestic routes and longer, international routes,” said Rob Baseggio, Regional Vice President, Sales, De Havilland Canada. “In addition, the DHC-8-400 aircraft’s greater passenger and cargo capacity set it apart from the competition and provide Biman with the opportunity to optimize its network operations.”

“Canada’s strong bilateral ties with Bangladesh through trade and investment, developmental cooperation, and people-to-people links are focused on improving the lives of Bangladeshi people. CCC is therefore exceedingly proud that the successful delivery of the first new DHC-8-400 aircraft to Biman Bangladesh Airlines will provide increased access to domestic and international destinations and support economic growth in the country,” said Ernie Briard, Interim President and Chief Executive Officer, CCC.

Photo and text by our contributor Andrew Cline.