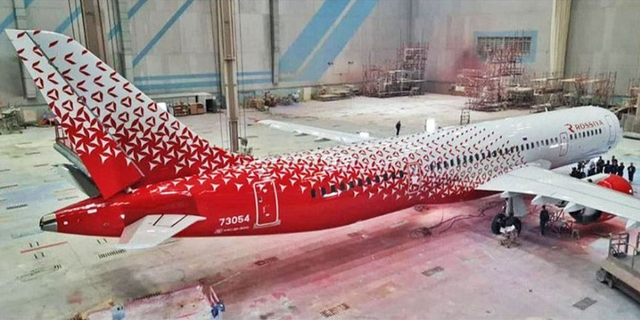 Russian aircraft manufacturer United Aircraft Corporation has released a video showing the repainting of MC-21-300 73054 (MC.0004) from the manufacturer's livery into the one of launch-customer Rossiya. UAC and Rossiya will use the third prototype to train flight- and ground crews in preparation for the entry into service of the MC-21 with the airline.

It's, however, unclear when entry into service will actually take place as the aircraft painted is a MC-21-300, which is the version of the MC-21 with western Pratt & Whitney PW1400Gs-engines and avionics. Due to the Western-sanctions on Russia, production of the MC-21-300 is impossible, meaning UAC is focusing on the MC-21-310, the version with Russian-made engines and avionics. This version took to the skies for the very first time on 15 December 2020 and is still in flight tests and hasn't been certified yet.

With the sanctions from the West in place, the MC-21 is an important aircraft for the future of the Russian aviation industry. Although the exact number is unknown, latest info shows that UAC has more than 500 orders for the aircraft. The Aeroflot Group is the largest customer for the type and is said to have more than 250 on order.