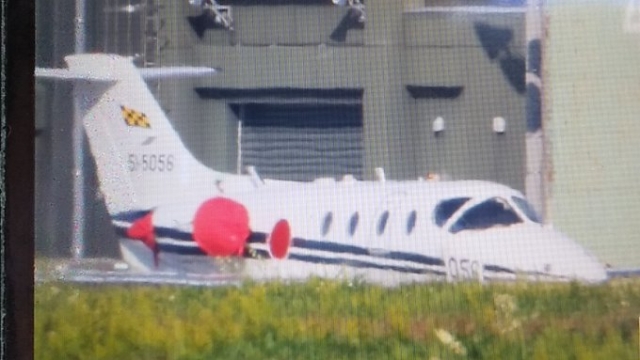 On 19 April seven T-400s (JASDF name for the Beech 400) made the move to Hamamatsu. Thereafter things became more fluid, all T-400s departed the next couple of days back to Miho and although T-400 operations at Hamamatsu were more frequent, the definitive move was not actually effectuated.

The unit is scheduled to relocate to Hamamatsu in order to make room for KC-46A operations from Miho with new unit 405 Hikotai. After the move 41 Kyoiku Hikotai will no longer be subordinate to 3 Yuso Kokutai but become part of 1 Kokudan, the Hamamatsu wing operating the Kawasaki T-4 with its two subordinate units 31 and 32 Kyoiku Hikotai. We already mentioned the possibility of 41 Kyoiku Hikotai receiving some sort of checker marking as 1 Kokudan has a long standing tradition of adorning the unit’s aircraft with black/yellow checkered tails.

Early October 2021, it was reported that T-400 with serial 51-5056 did not depart Hamamatsu but was hangered. And today, 6 October, it became the first 41 Kyoiku Hikotai T-400 which was noted with a small version of a black/yellow checkered badge. It looks like there is a green line bordering the badge at the bottom, this to distinguish the unit’s aircraft from 31 Kyoiku Hikotai (blue line) and 32 Kyoiku Hikotai (red line).