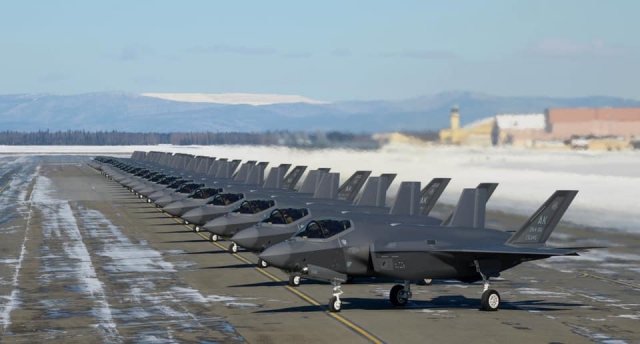 No fewer than 25 Lockheed Martin F-35A Lightning IIs assigned to the 354th Fighter Wing prepared to launch during Arctic Gold 21-2 exercise on 7 April 2021.

This year's exercise, held at the 354th Fighter Wing's homebase at Eielson Air Force Base (AK), will evaluate the Fighter Wing's ability to effectively generate F-35A Lightning IIs and deploy personnel and cargo from across the wing. According to the air base, Phase I and Phase II of the readiness action exercise will be held from 5-16 April 2021.

The photo was published at the Facebook page of Eielson Air Force Base. Next to that, the USAF also published some behind the scene footage, which is really nice to watch.

Have a look at the US Air Force Pacific Air Order of Battle at our website.