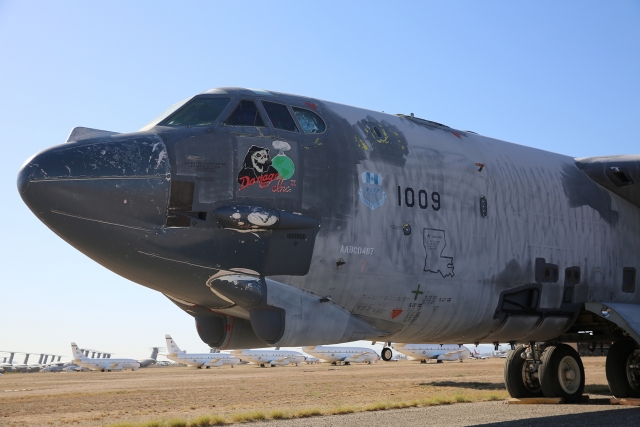 A Stratofortress bomber, named 'Damage Inc. II', was recently taken out of storage and is expected to be towed from Davis Monthan AFB (AZ) to the nearby Pima Air & Space Museum. Having arrived at 25 September 2008, the B-52H, with serial number 61-0009, was ever since in non-flyable status at Davis Monthan's 309th Aerospace Maintenance and Regeneration Group (AMARG).

At the premises of the Pima Air & Space Museum, the Stratofortress's wings, fuselage, and horizontal stabilizer will be removed in order to support research and modernisation efforts on the existing B-52H fleet. Once removed, the left wing and fuselage will eventually be relocated to a Boeing facility in Oklahoma City (OK), where it will serve as an integration model. The right wing and horizontal stabilizer of 61-0009 will be transported to McFarland Research and Development in Wichita (KS) to support structural integrity research for the B-52H Aircraft Structural Integrity Programme (ASIP).

Air Force Life Cycle Management Center’s Bombers Directorate stated that this is a great initiative to repurpose a retired B-52H into a tool to advance the fleet’s modernisation and sustainment efforts for decades to come. Upon arrival in Oklahoma City, the left wing and fuselage will be reattached and used to test how new technology or modifications will integrate with B-52 aircraft.

The integration model or mock-up will support a number of current and future modification initiatives, to include the Commercial Engine Replacement Programme and Radar Modernisation Programme. Also, as new weapons are developed and come on hand, the B-52H integration model will show how the weapons attach, what needs to change, and if they fit on the aircraft. This is an asset that will help integrate different items and weapons onto USAF's Stratofortresses quicker.

Earlier, Scramble Magazine wrote about USAF's efforts building a high-bay lab for its B-52H modernisation and sustainment programme and the use of a B-1B Lancer as an integration model.