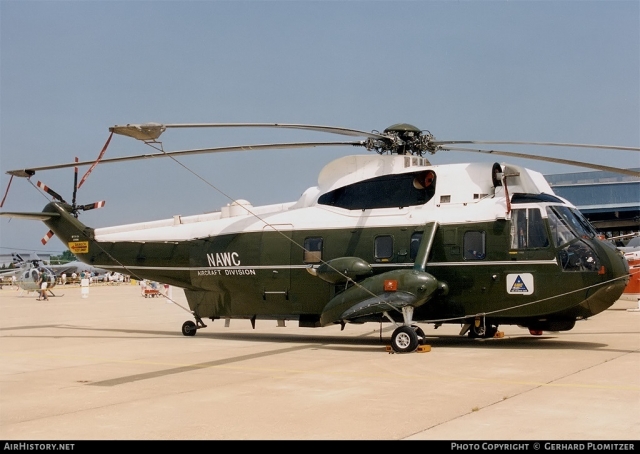 The Naval Air Warfare Center Aircraft Division (NAWC-AD) at NAS Patuxent River (MD) said goodbye to a 32 year old veteran Sea King that supported the development of new technologies for the Marine Helicopter Squadron (HMX) 1 fleet, as Seapower reports. According to excisting plans, the helicopter could be preserved in front of the Presidential Helicopters Support Facility at Patuxent River (MD).

The dark-green military variant of the well-known Sikorsky S-61, within the NAWC-AD known as “614”, referring to its BuNo 150614, rolled off the Sikorsky Aircraft assembly line in 1962 as a Sikorsky HSS-2 (later redesignated SH-3A). A decade later, the helicopter was assigned to Marine Helicopter Squadron (HMX) 1, where it was redesignated VH-3A and served for four years as a presidential helicopter for Presidents Richard Nixon and Gerald Ford. After a brief stint with the US Navy's Helicopter Combat Support Squadron (HC) 6 Chargers ('HW-xx') the Sea King was transferred with some 4,500 flight hours for seven years to the Military Aircraft Storage and Disposition Center at Davis-Monthan AFB (AZ).

In 1984, the VH-3A was returned to the fleet and assigned from 1988 onwards to the then-Naval Air Test Center (NATC) at Pax. As the helicopter became a pure testbed, it received according to the US Naval aircraft designation system the NVH-3A designation. 614 spent the next 25 years supported all kind of new innovations in sensors, avionics, radios, computer hardware and software, composite rotor blades, and more. It even hosted the US Navy’s first successful demonstration of satellite WiFi in a rotary wing aircraft.

It is researched that the NVH-3A was stripped to its metal bones in 2013 for a cockpit modernization project that was cancelled before the aircraft could be refitted, HX-21’s Presidential Helicopter Maintenance Team and flight test team undertook an effort to return 614 to service as a VH-3D testbed. They installed a new power plant, drivetrain, rotors, and landing gear, as well as new electrical, avionics and fuel systems, and machined more than 200 custom parts. On 4 April 2017, the fully rebuilt aircraft took to the air once again.

For three more years, 614 flew in support of a wide range of innovative test programmes from Pax, including secure wide-band line-of-sight communications technologies, night vision equipment for the executive transport mission, high-speed rotor and engine shaft track and balance functions, and test flight exercises with US Naval Test Pilot School students. On 22 October 2020, 614 made its final flight and the aircraft now rests inside one of HX-21’s hangars, awaiting the next chapter in its storied life. 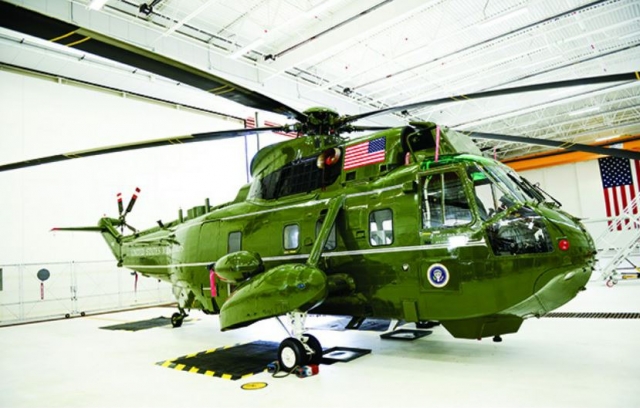 Photos by Gerard Plomitzer (614 at the Pax River airshow in 1995, kindly provided via AirHistory.net) and US Navy (614 when returned in April 2017)