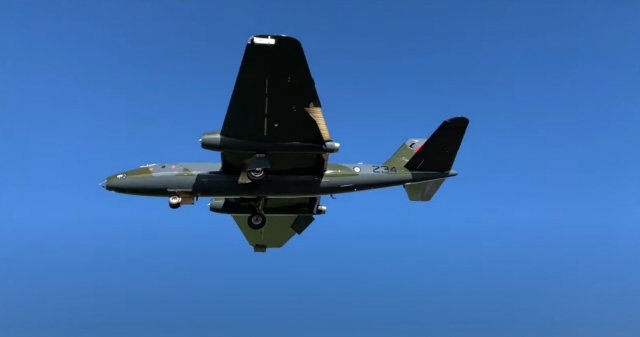 Canberra returns to the sky

This year, Australia celebrates the 100th anniversary of the Royal Australian Air Force.

As part of the centenary commemorations, RAAF No. 100 Squadron was re-formed as the Air Force Heritage Squadron. It operates out of two locations – RAAF Base Point Cook and Temora.

One of the public organisations that provide aircraft for said RAAF No. 100 Squadron, is Temora Flyers Inc., part of the Temora Aviation Museum. On 28 June, their English Electric Canberra TT18 WJ680 (VH-ZSQ) returned to the air. The aircraft is painted in full RAAF colours with serial A84-234.

WJ680 was built for the RAF and made its last flight for the British military in 1991. It was then sold on the civilian market and flown as G-BURM in full RAF livery with original serial WJ680. Sold to the Temora Aviation Museum WJ680 arrived in Australia in May 2002. It was then registered as VH-ZSQ and kept in flying condition as RAAF A84-234 in the eight years that followed.

The Canberra was last flown on 5 June 2010. It was due for scheduled NDT (Non-Destructive Testing), which then lead to a much larger restoration. The restoration process included converting the highly corrosive cartridge start engines to electric start engines, ensuring the longevity of this aircraft.

VH-ZSQ is one of eleven aircraft in The Royal Australian Air Force’s (RAAF) 100 Squadron supplied by the Temora Flyers Inc. and currently the only flying example in Australia (maybe even in the whole world)! The first public display is scheduled for the Aircraft Showcase on 9 and 10 October in Temora.

Scramble Magazine reported earlier on the RAAF No.100 squadron: https://www.scramble.nl/military-news/new-raaf-heritage-squadron