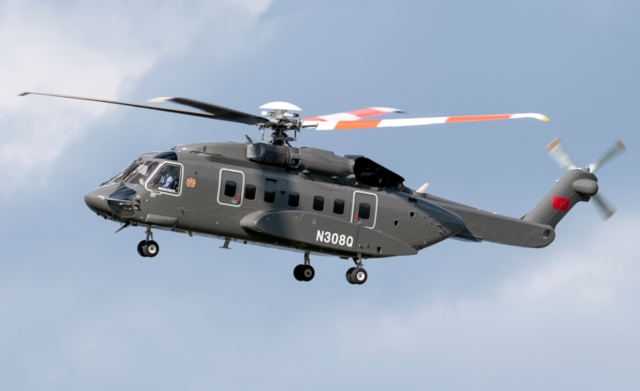 Completely unexpected, a dark grey Sikorsky S-92 Helibus appeared on the Internet. The helicopter, serial N308Q with construction number 92308, was captured during a test flight over Coatesville (PA) on 7 October 2020. It is reported to be the first Helibus destined for the ad-darak al-malikiyy al-maḡribiyy (Morrocan Gendarmerie Royale).

Unconfirmed reports arrived at the Scramble Headquarters that Morrocan police ordered two of these S-92s, with an option of an additional one. The helicopters are said to be ordered late 2018.

N308Q is registered to the Sikorsky Aircraft Corporation, West Palm Beach (FL) and is known since March 2020. The helicopter was built as an S-92A around January 2016 and was issued a Certificate of airworthiness in that month. No customer was found up to late 2018, but after the order of Morocco, the helicopter gained another CoA on 27 November 2018. After test flight the S-92 is expected to be delivered before years end.

Currently, the Groupement Aérien of the (see Scramble AOB Morrocan Gendarmerie Royale) still largely relies on French helicopters. Main bases are Rabat Souissi for the helicopters and Rabat Salé for a mix of helicopters and fixed-wing aircraft. Another fixed-wing station is Agadir. Seven permanent detachments are kept on airports throughout the country.

More information is absolutely welcome, please send your thoughts or knowledge about these S-92s to This email address is being protected from spambots. You need JavaScript enabled to view it.