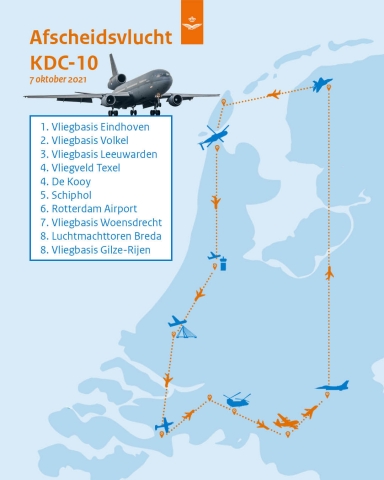 On Thursday 7 October 2021, the last KDC-10 tanker and transport aircraft of the Koninklijke Luchtmacht (KLu, Royal Netherlands Air Force) will fly a farewell round past Dutch airports.

The aircraft, serial T-235 (construction number 46956/235) and named Jan Scheffer, departs from Eindhoven air base at around 12:00 hrs LT and flies at a low altitude towards the military air bases in Volkel, Leeuwarden, Den Helder, Woensdrecht and Gilze-Rijen. It also flies over airports on Texel, Amsterdam and Rotterdam and the headquarters of the KLu in Breda.

T-235 was once built by McDonnell Douglas as a DC-10-30 for Martinair Holland at Long Beach (CA). The DC-10 was delivered as PH-MBP in December 1976. After extensive modifications for military use as tanker/transporter the aircraft was delivered to the KLu on 29 December 1995.

On 25 October 2021, the KDC-10 will leave the Netherlands and will be flown to its new owner in the US, Omega Air Services. The US company also took delivery of the first KDC-10 (serial T-264) in November 2019. Both aircraft join the Omega fleet as the company’s first boom-equipped tankers and can potentially refuel every operative type of aircraft in US military inventory.