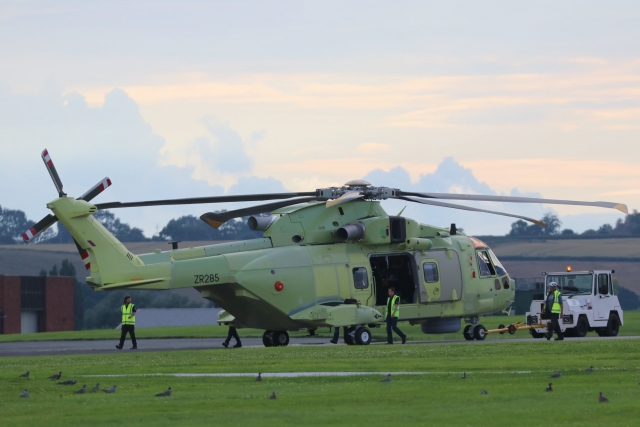 On 12 July 2021, Phil Adkin photographed a Leonardo AW101 Merlin for the Lotnictwo Marynarki Wojennej (LMW, Polish Navy) at Yeovil (UK). The helicopter, temporary registered as ZR285, was still in primer. It is not known if this specific AW101 is the first one destined for Poland.

Originally the Polish Navy planned to acquire eight AW101 maritime helicopters to replace its ageing Mi-14 helicopters currently operated by the 44 Baza Lotnictwa Morskiego (44.BLotM) at Darłówo air base (Poland). However, in 2018, due to financial reasons, the Polish Ministry of National Defence reduced the number of helicopters planned for acquisition to four, postponing the purchase of another four.

According to Polish media, the contract for four AW101s is valued at USD 450 million including training, logistics package and medical equipment. The agreement does not include the right to exercise an option. On 8 April 2019, the Polish Ministry of National Defence signed an offset package worth USD 104 million with Italian company Leonardo. The package includes nine commitments, the main of which is the planned creation of an AW101 helicopter maintenance and repair centre jointly with Leonardo. This maintenance centre will be located at the current Polish aircraft repair plant Wojskowe Zakłady Lotnicze Nr 1 S.A. (WZL-1) in Lodz.

The new helicopters will be used for anti-submarine warfare (ASW) and search and rescue (SAR) tasks. The deliveries are to be finalised by the end of 2022.