On 22 August 2020, the first example of the Tu-95MSM modernized strategic bomber made its first flight from the airfield of TANTK *) in Taganrog. The aircraft, registered RF-94121/21 Red and named Samara, has been piloted by the crew led by Andrey Voropaev, test pilot of the Zhukovsky flight test and development base - a branch of Tupolev PJSC. The successful flight took place at an altitude of 9,000 meters, lasted for 2 hours 33 minutes, with all systems and equipment working normally.

The work on the Tu-95MSM has been carried out jointly by PJSC Tupolev and PJSC TANTK based on a contract with the Russian Ministry of Defence signed back in December 2009. The upgrade comprises modernised NK-12MPM turboprops with new AV-60T propellers, aimed at extension of the service life of the aircraft and improvement of its take-off and landing characteristics. At the same time, a completely new armament system with new onboard electronic equipment complex has been developed, starting with a new phase-array Novella-NV1.021 radar replacing the legacy Obzor-MS type, a sophisticated Meteor-NM2 airborne defensive aids suite and a glass cockpit suite with SOI-021 data display system. The modernisation also significantly increases the navigation accuracy due to new ANS-2009 astronavigation system, NVS-021M navigation computer system and KSU-021 integrated control system developed by the Moscow Institute of Electromechanics and Automation (MIEA). A decision on the deep modernisation of the entire fleet of Tu-95MS bombers shall be made by the Russian Ministry of Defence based on the results of state trials.

It should be noted that the current Tu-95MS bombers have already received capability for the use of modern high-precision weapons in the early stage of modernisation. In carrying capacity these old airframes are not entirely inferior, not even to the planned Tu-160M2 jet bombers. The external pylons of the modernized Tu-95MS can carry up to eight Kh-101 cruise missiles with a maximum flight range of about 5,000 kilometers and a conventional 400kg heavy warhead. The Kh-102 nuclear version of the missile carries a warhead with a variable yield of 250 kilotons to one megaton.

As for the Tu-95MSM, its armament will likely be expanded with a new Kh-50 theater-level medium-range cruise missile, a 6 meters long rocket with 1,500 km flight range, weighing over 1,500 kilograms. This missile enables a more affordable precision attack from stand-off ranges, with the cruising speeds of approx. 700 km/hr and final approach speeds over 950 km/hr. The Tu-95MSM aircraft is intended to carry up to fourteen Kh-50s, including six on the external pylons.

In general, the Tu-95, first flown in 1952, is rarely subjected to criticism despite its conceptual obsolescence. This is not entirely surprising as a modernisation of the Tu-95MS still looks like a justified step both from military and economic point of view. Russian strategic bombers are still primarily seen as platforms for launching stand-off missiles able to operate without entering the enemy air defense zone. Unlike with American bombers, the role of dropping high-precision bombs has never been addressed here, that is why the upgrade packages for the Tu-95MSM or the Tu-160M2 never include suspended targeting pods such as Sniper-XR or Litening III. 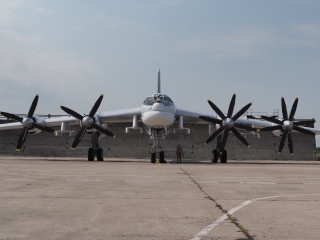 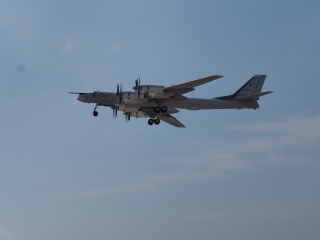 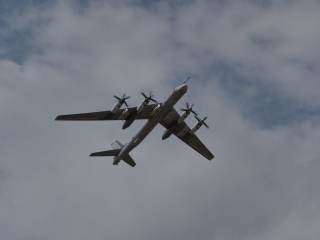