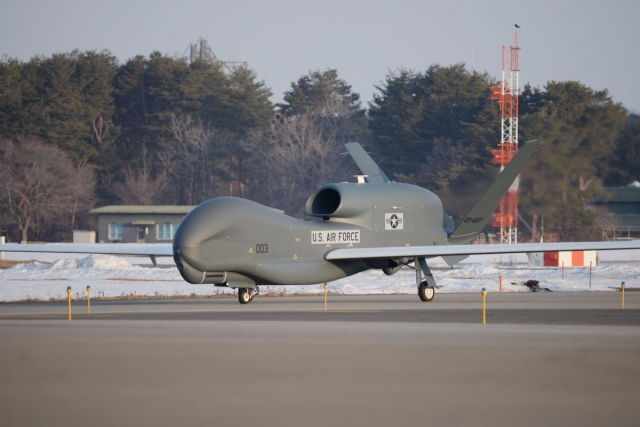 The first Northrop Grumman RQ-4B Global Hawk for the Japan Air Self-Defense Force (JASDF) arrived at Misawa air base on Saturday 12 March 2022. It is the first out of an order for three Global Hawks which will be based at Misawa.

The aircraft had its JASDF serial 23-6003 applied, but all other Japanese markings were covered by stickers with USAF markings, probably for legal and insurance reasons. All three RQ-4Bs will be operated by the Teisatsu Kokutai, the reconnaissance group once responsible for its sub-ordinate unit 501 Hikotai, operating the various RF-4E Phantom versions from Hyakuri.

The Teisatsu Kokutai was reformed on 18 March 2021 as a temporary unit first, after all three have been delivered it will become a regular unit. At this moment it is not known if a sub-ordinate Hikotai will be formed as the actual unit for the day to day operations.

The first Japanese Global Hawk made its maiden flight from Palmdale (CA) on 15 April 2021 and was noted in September 2021 at Mojave (CA) in full JASDF colours and markings with serial 13-6001. This will probably change once the aircraft is delivered to Japan. The first digit of the serial is indicating the last digit of the year of delivery to the JASDF so following Japanese logic, if delivery is this year it will become 23-6001.

The photographer at Mojave had some remarks about the sheer size of this unmanned aircraft, its wingspan is comparable to that of a Boeing 757, or C-32 for the military buffs.