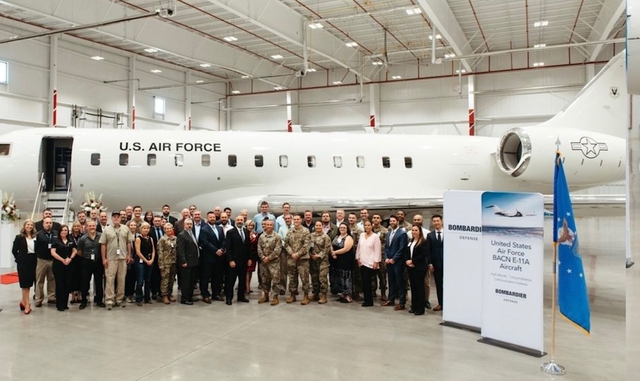 This aircraft delivery is the first as part of an order from the USAF, announced in June 2021, to modify up to six Global 6000 business jets. The 2021 contract, valued at USD 465 million, included an immediate firm order for one Global 6000 with subsequent additional orders announced in April 2022.

Under the 2021 contract, the USAF has confirmed orders for three Global 6000 aircraft, with the next two deliveries expected in 2022 and 2023. The USAF has announced its potential to purchase an additional aircraft each year through 2025 under the 2021 contract. On 5 June 2021, Scramble Magazine wrote on the speeding up of the acquisition of new aircraft for the BACN programme.

Serial 21-9045 (c/n 60045, ex N9045, ex N725CS, ex C-GRPB) is a new built Global 6500 and Scramble Magazine assesses it will most likely be designated as E-11B. The Global will receive a special mission configuration for service in the BACN programme. The new Global 6500 is all over gloss white and does not seem to have received it’s extensive external antennas yet.

The BACN serves as high-altitude communications gateway, relaying or bridging voice and data between air and surface forces and handily surmounting traditional obstacles such as mountains, rough terrain or distance. Dubbed “Wi-Fi in the sky” by the USAF, BACN-equipped Global aircraft are referred to as the E-11A fleet. The programme, integrated by Northrop Grumman Corporation, reduces communication issues associated with incompatible systems, adverse terrain, and distance. According to Lt Col Eric Inkenbrandt, BACN increases interoperability which results in forces that execute faster, more reliably, and with less risk to the warfighter.

Under previous agreements, Bombardier delivered four second hand Global aircraft to the BACN programme, but these aircraft were a mix of Global, Global XRS and Global 6000 variants. The four saw extensive usage in the Afghanistan war and were forward based in Kandahar with the 430th Expeditionary Electronic Combat Squadron (430th EECS).

E-11A 11-9001 (c/n 9001), the first ever built Global, has an astonishing amount of air frame hours and cycles, in excess of 30,000. One of the four aircraft was lost in a well documented tragic crash. When the conflict in Afghanistan wore down, the three remaining aircraft relocated to Al Kharj/Prince Sultan Air Base in Saudi Arabia.

In July 2021, the USAF announced that the 319th Reconnaissance Wing at Grand Forks AFB (ND) will now provide command and control support for the E-11 Battlefield Airborne Control Node (BACN) aircraft mission. Pending the passing of the National Defense Authorization Act (NDAA) with provisions for the E-8 Joint Surveillance Target Attack Radar System (JSTARS) intended partly retirement, the E-11 mission is expected to stand up at Robins AFB (GA) in 2022.