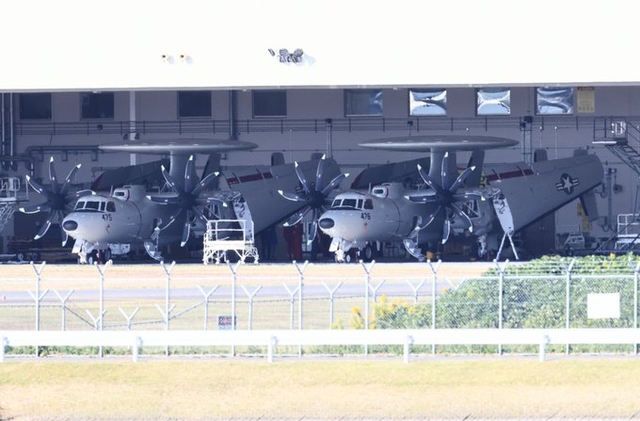 The fifth and sixth E-2D Hawkeye Airborne Early Warning (AEW) aircraft for the Japan Air Self-Defense Force (JASDF) were shipped to MCAS Iwakuni aboard the cargo vessel Ocean Gladiator, all wrapped up in white protective plastic and arrived probably on 18 October 2022.

After off-loading they were towed into one of the US hangars where work started to remove the coating. By 24 October, all plastic was removed, showing the aircraft still had US roundels applied although both had their future JASDF serials, 21-3475 and 21-3476, on the rudder.

Testflights will be the responsibility of the US, so that is why the US roundels (and possibly also Navy titles?) are still on the aircraft. Only after completion of all system checks and test-flights the Hawkeyes will officially be handed over to the JASDF at Misawa air base.

The second E-2D Hawkeye for the JASDF was noted at Melbourne International (FL) with Northrop-Grumman in October, finally revealing its full serial, 91-3472. So according to the first digit of the serial, delivered to the JASDF in 2019. It operated within Fleet Replacement Squadron (FRS) VAW-120 Greyhawks from NAS Norfolk (VA) for crew training, probably with its JASDF serial applied but with US roundel and Navy titles. It was seen as such with Northrop-Grumman inside their hangar.