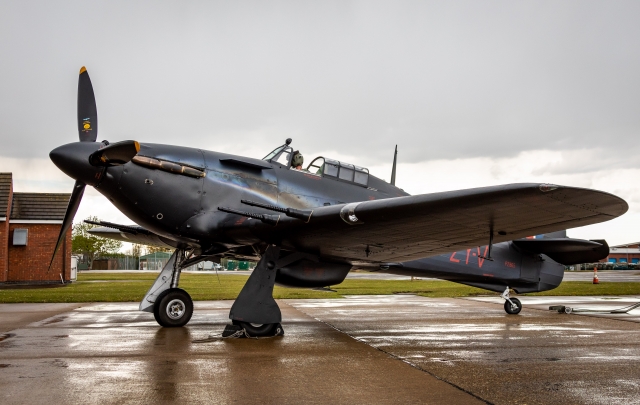 The original ‘ZY-V’ was Hurricane IIC BE634 of 247 Sqn, which was based at Predannack and Exeter in 1942. It was involved in defensive night fighter patrols and night intruder operations over enemy territory. Unusually, the 247 Sqn Hurricanes wore half-sized roundels and code letters over their all-black night fighter camouflage.

The all-black night fighter Hurricanes of 247 Sqn were used for night air defence of the Plymouth and Exeter area and for night intruder operations against targets in north-western France.

The new livery replaces that of a Hurricane as it was flown by the South East Asia Command with code ‘EG-S’. That colour scheme was originally carried by Hurricane Mk IIC HW840 of 34 Squadron, SEAC during 1944, which was the personal aircraft of a Canadian pilot, Flight Lieutenant Jimmy Whalen DFC.