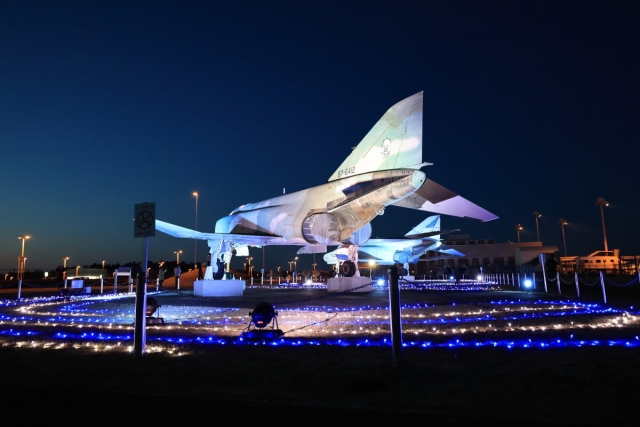 For years, Hyakuri Air Base (Japan) was the place for F-4 Phantom lovers, as three units of the Japan Air Self-Defense Force (JASDF) operated this iconic aircraft, 301 and 302 Hikotai in the fighter role with the F-4EJ Kai and 501 Hikotai in the photo/reconnaissance role with the RF-4E/RF-4EJ Kai.

In March 2021 all Phantom operations from Hyakuri stopped when the last unit 301 Hikotai officially stood down as Phantom unit, and was re-established as a F-35A Lightning II unit at Misawa Air Base the next day. Since then a lot of Phantoms were scrapped on base including probably all specially coloured Final Year examples.

Sad news again now it seems that also the two preserved Phantoms near the main gate of Hyakuri have fallen into the hands of the scrap man. Visitors to the open house in December 2019 probably noticed the two aircraft, F-4EJ 17-8302 in the 302 Hikotai 40th anniversary colours and RF-4E 57-6906 already in a fenced off enclosure.

Hyakuri spotters reported that work had started on 17 January 2022 in dismantling the two aircraft, but as all comments were rather distressed, this actually means scrapping. On the bright side, a crowdfunding has begun in an attempt to raise money for the repainting of the two Phantoms which are on display on the civil side of the air base, known as Ibaraki Airport.

The aircraft, F-4EJ 37-8319 and RF-4EJ 87-6412 are borrowed from the JASDF by the Omitama City Ibaraki Airport Utilization Promotion Council, and are already ten years out in the open. Understandably their colours have faded over the years and nearly ten million yen is needed for the total job. In return for a donation, if the amount is high enough, you will receive some commemorative goodies such as a towel or tumbler.

UPDATE 19 January 2022
Probably earlier then planned and instigated by the bad reactions on social media about the scrapping of the two Phantoms, Hyakuri Air Base announced it is preparing two Phantoms to replace them at the main gate. The tweet showed the two Phantoms inside a Hyakuri hangar, F-4EJ Kai 17-8437 in the standard grey colours and RF-4E Kai 47-6901 in the beautiful blue colours. It is unclear when they will be placed at the main gate, merely the suggestion to watch out.