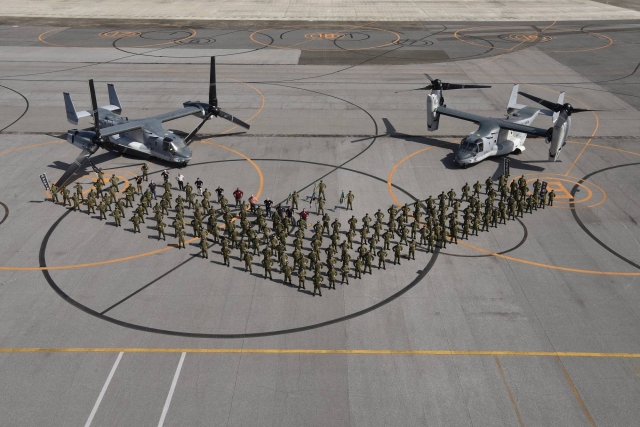 Up until now, it seems the Japan Ground Self-Defense Force (JGSDF) is hardly flying its V-22 Ospreys. Only a few flights were recorded, all staying well inside the Kisarazu boundaries and/or its traffic circuit over Tokyo Bay.

There is a general resentment within the Japanese society against the Osprey, sparked by the incidents and accidents at the beginning of its operational career in the US Forces. That is probably why the JGSDF is extremely cautious with introducing their Ospreys outside its temporary home base Kisarazu. Any mishap at an early stage of its Japanese career will negatively affect public opinion. So the JGSDF is mainly focussing on training its flight-crew and ground personnel to an extremely high safety level.

However, on 13 July 2021 the Japanese Ministry of Defence (MoD) gave a briefing to the council of Kisarazu city about its intention to operate the Osprey to three other facilities, broadening the operation-area. These are Tateyama Air Base, Hyakuri Air Base and the Higashifuji Exercise area. In the briefing it was again stressed that Osprey flights would not fly over build-up areas and hospitals.

Tateyama seems to be the main focus as it will be used for training take-off and landings and instrument approach training, as well as acting as an education and training centre for over-water-operations.

The main objective of the seventeen V-22 Ospreys that Japan ordered will be the transport of the JGSDF’s Amphibious Rapid Deployment Brigade, based at Aiura near the city of Sasebo. The airport of Saga is deemed to be the most suitable for housing the Transport Aviation Group (Yuso Kokutai), operating the fleet of Ospreys, due to its proximity to Aiura. However, due to certain circumstances, work on infrastructure at Saga to accommodate the Ospreys has either yet to begin or is not ready. The city of Kisarazu has given permission to the JGSDF to operate the fleet from Kisarazu airfield for a maximum period of five years.

At the moment there are seven V-22s in Japan, the ten others were all seen in the USA, some in the process to be prepared for shipment to Japan.