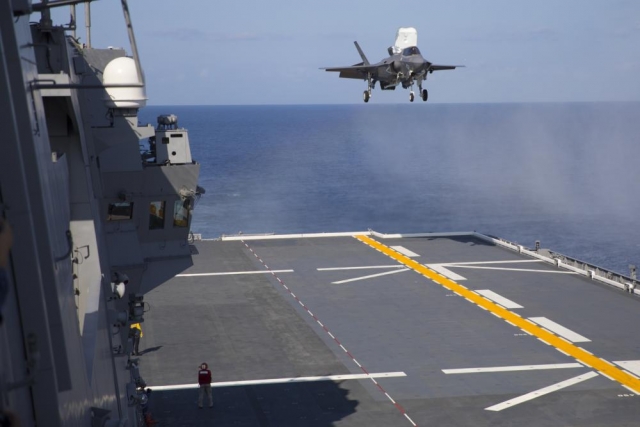 As reported earlier, Japan’s solution to the problem of defending its disputed islands is acquiring the F-35B Lightning II and operate them from ships or forward operating locations on land.

As Japan has no real aircraft carriers it was decided it would convert both Izumo-class helicopter carriers (DDH-183 Izumo and DDH-184 Kaga) to enable short take-off and vertical landing (STOVL) F-35B operations. These modifications do mainly concern applying heat resistant coating on the upper deck and some modifications to the bow, making it rectangular in shape. A ski-jump was deemed not necessary as Japanese F-35B operations will be mirroring the USMC operations for the type.

Work on the Japanese Ship (JS) Izumo was partly finished at the end of September and the ship sailed to the harbour of MCAS Iwakuni where it birthed. USMC personnel and equipment embarked in order to verify the ship’s ability to execute safe F-35B operations. On Sunday 3 October 2021, while cruising near Shikoku, two F-35Bs of Marine Fighter Attack Squadron (VMFA) 242 Bats ('DT-xx'), BuNo 169623/DT-01 and BuNo 169624/DT-02, were used in this trial and both made a safe landing and take-off from the Izumo.

All trial and verifications were conducted successfully and the Japan Maritime Self-Defense Force reported it will continue modifications on the Izumo (scheduled to be finished FY2024) and the Kaga and also with preparations for future operations with Japanese F-35Bs.

The MoD is planning to acquire a total of 42 F-35Bs, of which eight are now officially in the process of being procured. The aircraft will be operated by the Japan Air Self-Defense Force and Nyutabaru has been chosen to be the land-base for at least one squadron. The deployment of the first six aircraft to Nyuta will begin in the 2025 fiscal year.