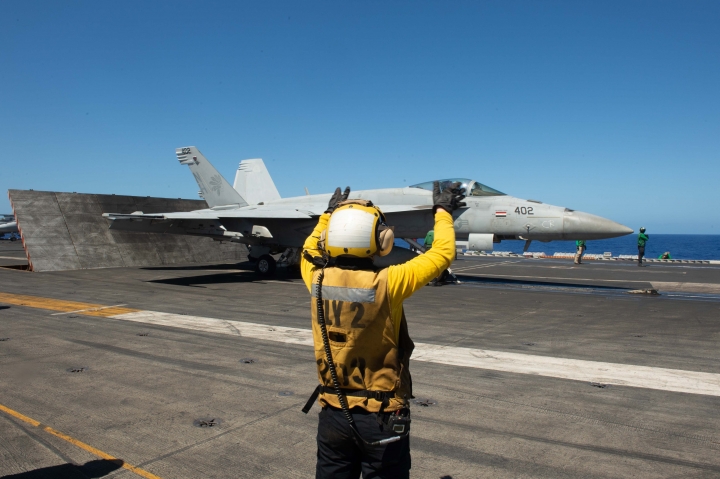 The US Navy showed a picture of a F/A-18E Super Hornet on board USS Theodore Roosevelt (CVN-71). The super carrier acts as the flag ship of the Carrier Strike Group (CSG) 9 and has Carrier Air Wing (CVW) 11 embarked. Early March 2021, the CSG continues to operate in the Philippine Sea.

Strike Fighter Squadron (VFA) 87 Golden Warriors is one of the nine squadrons assigned to CVW-11 and its one with history. One of the squadon's Rhino's (BuNo 168912, at that time AJ-302 within CVW-8 and operating out of the CVN-77 with call sign Freedom 33) with Navy Lt. Cmdr. Michael “Mob” Tremel  as the pilot shot down a Syrian Arab Air Force (SyAAF) Su-22 with a AIM-120 Advanced Medium Range Air-to-Air Missile (AMRAAM) near Ja'Din (Syria) on 18 June 2017. Ja'Din is located just south of Al Tabqa and west of the once Islamic State in Syria (ISIS) proclaimed capital of Al Raqqa.

In a nutshell... a formation of four (Super) Hornets entered a box over Syria for a close air support sortie. During awaiting requests for strikes, a Russian Su-27 of the Special Purpose Aviation Brigade, originating from Khmeimim (Syria), showed up. Tremel worked on the Su-27 and searched for its intentions as another aircraft appeared on the F/A-18's radar that appeared to be a Syrian Arab Air Force Su-22 (NATO reporting name FITTER). Upon identification of the Su-22, Mob got on radio with an E-3 airborne command and control post that subsequently began sending warnings to the Su-22 for it to divert its course. As that E-3 communication failed, the Lt. Cmdr. manoeuvred its Rhino over the Fitter and dropped several flares as a warning. As the Su-22 pilot, Captain Ali Fahd, ignored these and continued its course the situation got more serious. Ali manoeuvred its Su-22 towards US backed Syrian Democratic Forces (SDF) positions in the town of Ja'Din and at 18:43 hrs (LT). He dived down and dropped ordnance on the SDF fighters, resulting in multiple injuries. Following the US Rules Of Engagement, Mob locked onto the FITTER with an AIM-9X Sidewinder and fired. The Su-22 shot-off flares and was able to successfully avoid the air to air missile. Up to day it is not clear if Ali was lucky or the AIM-9X failed. Mob then quickly locked on with an AIM-120 and fired at the Su-22. The AMRAAM hit the backside of the Su-22, with known results. 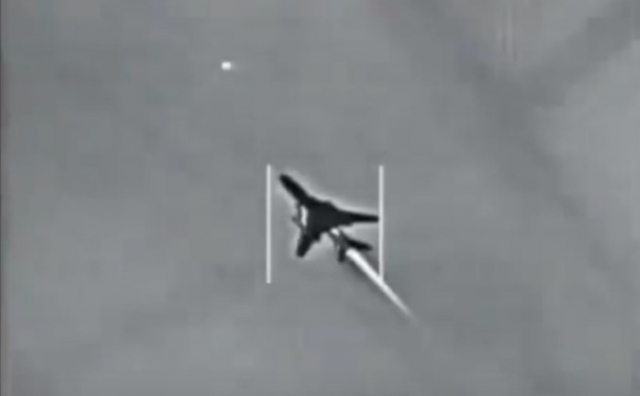 Captain Ali was able to eject on time and was found alive by Syrian troops one day later in the village of Shuwaihat.

The incident marked the first time the USA shot down a manned aircraft since 1999, and the event was the first kill for the F/A-18E.

In the mean time, the squadron transitioned from CVW and from code/modex and now carries the NH-4xx series within CVW-11. But the Su-22 kill-mark on BuNo 168912 is still present as the picture shows on 27 February 2021. 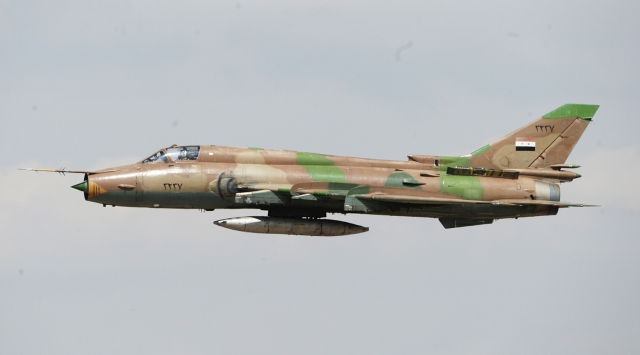