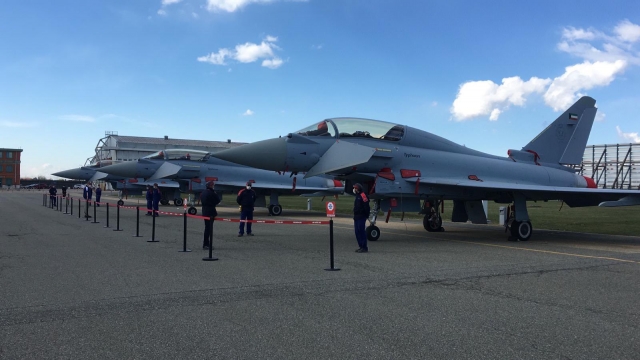 On 15 April 2021, Eurofighter published two images of what seems to be the first three two-seat Typhoons, destined for the al-Quwwat al-Jawwiya al-Kuwaitiya (KAF, Kuwaiti Air Force) on a Twitter page. The aircraft are lined up for some sort of display outside, but miss the installation of their Martin Baker Mk16 ejection seats. Other than that the jets seem complete and sport a one tone grey colour scheme, they do carry a tone down marked Kuwait Air Force crest and a full colour Kuwaiti flag on the tail. No serials are applied yet, it seems. These three should be manufacture fuselage numbers (not serials) KT001, KT002 and KT003. Time for a recap of the programme with some updates and new details.

In April 2016, Kuwait signed an USD 8,7 billion contract with Finmeccanica (now Leonardo) for the supply of 28 aircraft (including six two-seat multi-role trainers), with associated training, logistics, and an operational support package. The whole includes also equipment and a suite of training devices, to allow the  establishment of an operational conversion unit in Kuwait. The contract also includes the construction of type specific infrastructure at future home base Al-Salem Air Base and a three-year package of initial support services (with an option for a further five years). Kuwait thereby became the eighth customer for the Eurofighter Typhoon.

The Eurofighter Typhoon final assembly line at the Leonardo  Aircraft Division factory at Torino-Caselle Nord (Italy) launched the final assembly of the first KAF Typhoon formally in October 2018. Back then, the plan was to start the delivery in 2020, with final deliveries in 2023. The worldwide COVID pandemic was the cause for delays last year. The production and final assembly of the fighter jets suffered from those economic complications and even left Leonardo to admit that short-term cash flow 'slippages' hampered the programme. 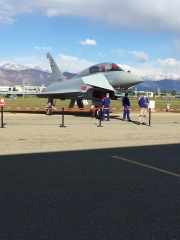 Now the programme seems to get back on track again. The first seven Kuwaiti pilots graduated from their Aeronautica Militare (AM, Italian Air Force) flying training courses, on 5 July 2020. The experienced Kuwaiti pilots have undertaken some training with the AM Eurofighter F-2000 operational conversion unit (20° Gruppo of 4° Stormo) at Grosseto, but the graduation ceremony was held at Lecce/Galatina, home to the M346-equipped International Flying School/61° Stormo. These officers will now instruct other future KAF Typhoon pilots.

Kuwait’s 28 aircraft will be the most advanced examples of the Eurofighter Typhoon produced so far, and the first delivered to the new P3Eb standard. P3Eb provides a package of capabilities that build upon the Typhoon’s previous enhancement programmes, using the functional content of P3Ea as what Leonardo calls “a starting technical development baseline.”

P3Eb will be delivered in two phases. The KAF entry into service (EIS) standard includes the new E-scan radar (with an EIS capability), AIM-120 AMRAAM (up to C7), and a Meteor initial training capability, ballistic bombs (Mk82, 83, and 84), the Sniper laser designator pod with downlink, the P5 ACMI pod (providing real-time training for air-to-air gunnery, IRIS-T, and AMRAAM C7), and VOR navigation capability.

Later, the KAF Enhanced standard will be introduced. This will introduce an upgraded E-scan radar, Meteor full capability, GBU-31 JDAM precision-guided bombs, Enhanced Sniper (full-range capability), and a P5 ACMI Pod Enhancement. The radar used by Kuwaiti Typhoons is the Captor-E to Radar One Plus standard. This also forms the basis of the four-nation (United Kingdom, Italy, Spain and Germany) AESA radar development programme, with the same hardware and the same performance. The Captor-E radar provides significantly more power than most competing systems. The advanced antenna repositioner gives the Typhoon radar a field of regard (total area that can be captured by a movable sensor) of 200 degrees.

Kuwait’s Typhoons will be the first to use the Lockheed Martin Sniper advanced targeting pod, following the award of a direct commercial sale contract for eighteen Sniper advanced targeting pods, together with integration and logistics support, on 28 September 2016. The Sniper pod has recently been upgraded to include two-colour laser spot tracking, short-wave infrared, and advanced non-traditional intelligence, surveillance, and reconnaissance modes.

Furthermore, the Kuwaiti aircraft will be capable of carrying the MBDA Storm Shadow cruise missile, providing a long-range stand-off capability that the US will not provide with the Super Hornet, due to missile technology control regime restrictions. Kuwait’s Typhoons are also due to be equipped to carry DRS-Cubic ACMI P5 combat training pods and will be fitted with an enhanced navigation aid with VOR.