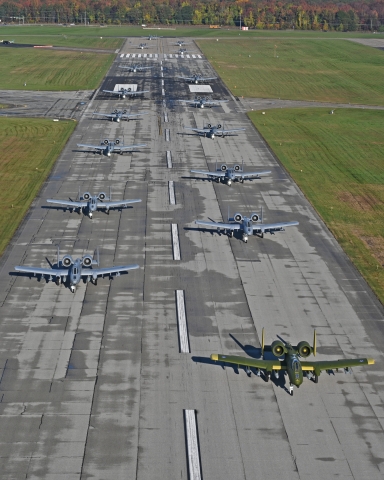 On 3 November 2021, the Maryland Air National Guard demonstrated its operational readiness exercise by carrying out a 16-aircraft 'Elephant Walk' with their Thunderbolt IIs.

Nowadays, more 'Elephant Walks' are carried out by USAF units to demonstrate their ability to launch combat-ready aircraft that are deployable for no-notice contingency operations.

The latest readiness exercise highlighted the agility and rapid mobility of Maryland Air National Guard's 104th FS/175th Wing. As the unit has twenty MD coded A-10Cs in it's inventory they were able to showcase 80% of their assigned aircraft.

The wartime 489th Fighter Squadron was reconstituted on 21 June 1945 and re-designated as the 104th Fighter Squadron, and was allotted to the Maryland Air National Guard on 24 May 1946. It was organised at Harbor Field, Baltimore (MD), and was extended federal recognition on 17 August 1946 by the National Guard Bureau. It was initially equipped with F-47D Thunderbolts. With the surprise invasion of South Korea on 25 June 1950, and the regular military's complete lack of readiness, most of the Air National Guard was federalised placed on active duty. The Maryland ANG was not federalised, however its aircraft were replaced by very long distance North American F-51H Mustangs in 1951 to better carry out its air defense mission.

By 1955 the Mustangs were at the end of their operational lifetime, and the Air Force issued a directive to Air Defense Coammand (ADC) to replace all of its interceptor force with jet aircraft. As a result, the 104th entered the jet age and received Korean War veteran F-86E Sabres to replace its propeller-driven Mustangs, which were retired. However, Baltimore Harbor Field was unsuitable for jet aircraft due to the length of its runway, and the squadron was forced to temporarily base its jet aircraft at Andrews AFB, and later at Friendship Airport, while it looked for a new home. Eventually, the squadron relocated to Glenn L. Martin Company Airport on 1 July 1957 whose longer runway was necessary to support jet operations. 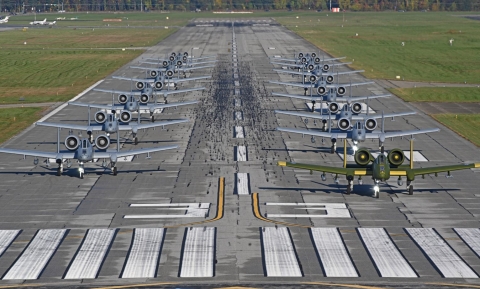 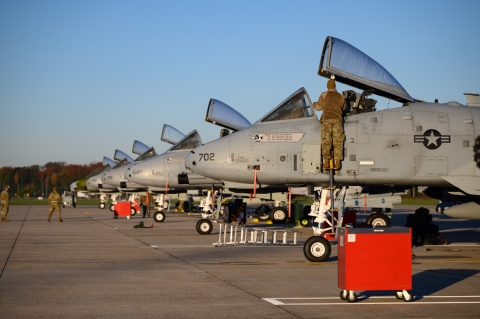 In 1979, the 175th Wing was the first Air National Guard unit to receive the A-10 Thunderbolt II ground support aircraft. The 104th received brand new A-10A Thunderbolt II attack aircraft from the factory in Hagerstown (MD).