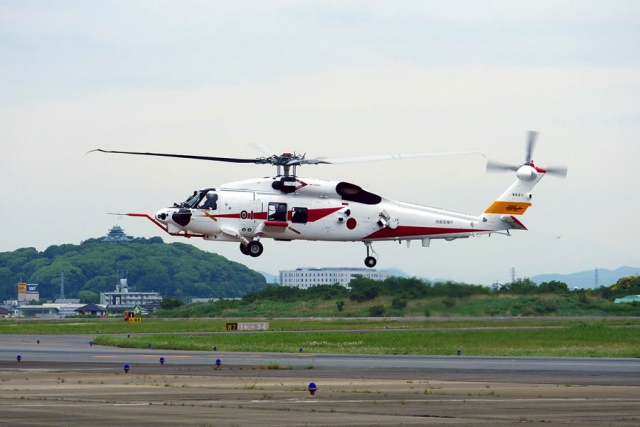 The prototype of the XSH-60L made its first hover flight from the Mitsubishi factory at Nagoya (Japan) on 12 May 2021.

The Acquisition, Technology and Logistics Agency (ATLA) announced that the XSH-60L had cleared all its ground tests on 11 May and could perform its first flight the next day. Indeed, on Wednesday the test pilots made a successful thirty minutes hover flight with this further improved version of the SH-60K Seahawk in the red/white colours, serial 8501. After all basis flight tests are finished, both prototypes will be handed over to the ATLA for further evaluation.

The SH-60L is a further Mitsubishi development of the original SH-60J and SH-60K operating with the Japan Maritime Self-Defense Force (JMSDF). At first glance there is no external difference between the SH-60K and SH-60L, all improvements are internally and related to a new sonar system, high speed communication system and improved engine transmission.

The prototype 8501 has a long history acting as a development and test aircraft. It was originally a UH-60J frame, but before delivery it was converted to XSH-60K 8401. There are pictures of it with only one starboard cabin window, later it was modified to the SH-60K standard with two starboard cabin windows. Later on it was converted to a USH-60K to act as the development aircraft for the successor of the JMSDF UH-60J fleet. However, it was decided the JMSDF would lose its land-based SAR units, this mission is/will be the responsibility of the Japan Coast Guard and the Japan Air Self-Defense Force. Now the Seahawk is acting as the SH-60L development tool.

It is believed that SH-60K deliveries will continue for the moment, possibly to number 75, after which the SH-60L will take over the production line. Of the original 103 SH-60Js delivered, less than ten are still active. SH-60K production currently stands at 71.