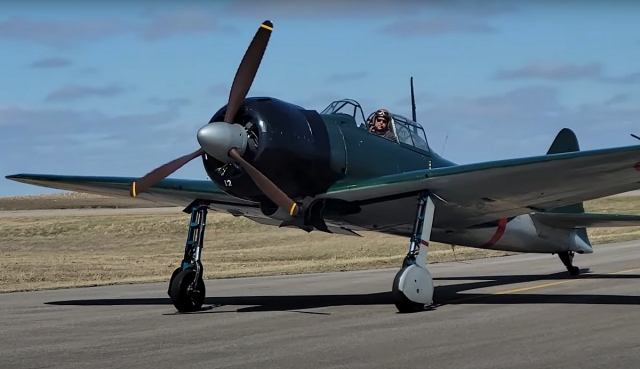 After thorough maintenance at the facilities of Fighter Rebuilders in Chino (CA), Mitsubishi A6M3 N553TT (c/n 3858) has found a new home. The ‘Zero’ arrived at Fagen Fighters in Granite Falls (MN) on 26 April 2022.

The fighter is one of the most famous of its kind as it was used in the filming of the movie ‘Pearl Harbor’ for which it was shipped to Honolulu in March 2000. It still carries the same serial as was used during the filming: ’A1-112’.

The wreck of this ‘Zero’was recovered from Babo Island in Indonesian New Guinea around 1990. It was bought by the Museum of Flying, Santa Monica (CA) and shipped to Russia for restoration in 1994.

It seems that only parts of the original undercarriage were used in the restoration, so it should, in fact, be called a reconstruction. In Russia, a Pratt & Whitney R1830 radial was installed as the new powerplant. The Zero returned to the USA in 1998 and was registered as N553TT.

Its use in filming was mentioned before, after which the machine was bought by Zero Enterprise Inc. of Wilmington (DE). From 2014 the Zero spent some years flying around in Japan. N553TT is not the only Mitsubishi Zero in the USA: two other machines salvaged during the same expedition as 3858 were also rebuilt. These Zeros are N712Z (c/n 3869) and N3852 (c/n 3852)