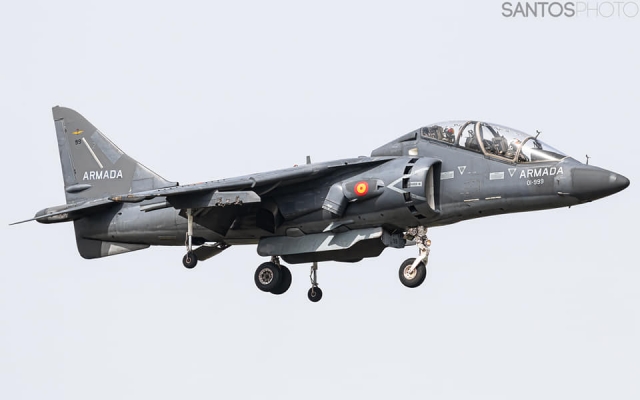 As a nice surprise, the Armada Española (Spanish Navy) showed its "new" TAV-8B Harrier II during the first testflight at Rota on 3 March 2021.

The Harrier arrived at the port of Rota a few months ago by ship. The aircraft is still in the basic colours of its previous owner, the United States Marine Corps, but with Spanish markings applied. The serial and code of the Harrier is VA.1B-40/01-999. It is not known if the code, which looks temporary (999) will be changed in the future.

The acquisition of the Harrier trainer version is reported to be as a replacement for the current TAV-8B Harrier. The Spanish Navy operates the Harriers with number 9 escuadrilla Arma Aerea de la Armada Española (Eslla 009) and they now have twelve aircraft in their inventory.

We would like to know what the previous identity is of the new Harrier, please update us at This email address is being protected from spambots. You need JavaScript enabled to view it.