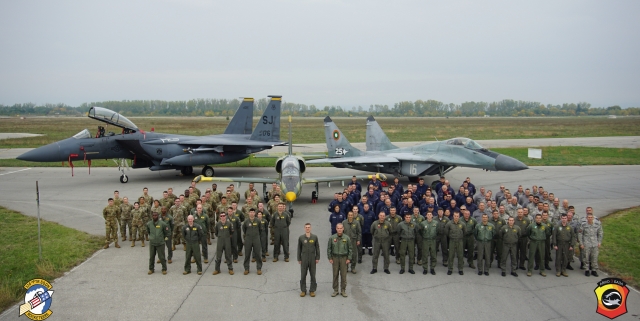 For the last month, Strike Eagle pilots and airmen from the 4th Fighter Wing, based at Seymour Johnson AFB (NC), have been hopping from NATO air base to air base across the Black Sea region as part of the US Air Forces Europe-Air Forces Africa-led Operation Castle Forge. At first, not much information was given since they arrived at RAF Lakenheath (UK).

These short-notice forward USAF deployments demonstrate the Air Force’s Agile Combat Employment (ACE). Along with Larissa Air Base (Greece) and Borcea Air Base (Romania), the F-15E Strike Eagle crews have already staged a series of rapid dispersals to Graf Ignatievo Air Base (Bulgaria).

The Strike Eagles flew alongside Bulgarian Air Force MiG-29s from 18-22 October 2021 during the first leg of Castle Forge before redeploying to Larissa AB. They returned on 1 November for another week of flying in and over Bulgarian airspace. The Bulgarian MiG-29 fighters teamed up with the Strike Eagles to perform Basic Fighter Maneuvers (BFM), tactical interceptions, and several complex tactical scenarios involving Bulgarian Ground Based Air Defense Stations (GBADS) and Su-25 aircraft from nearby Bezmer Air Base.

In addition to local flying with the Bulgarian Air Force, the Strike Eagles also demonstrated NATO's ability to form a responsive joint force by supporting protected entries for US 6th Fleet vessels into the Black Sea, including the destroyer USS Porter (DDG 78) and the amphibious command ship USS Mount Whitney (LCC 20), which were both on routine patrol.

Although this is not the same as a Theater Security Packages (TSP), which normally takes longer (variation from five to eight months), it is expected that the personnel of the 4th Fighter Wing, which consists mainly out of the 336th Fighter Squadron, will be home for Christmas. 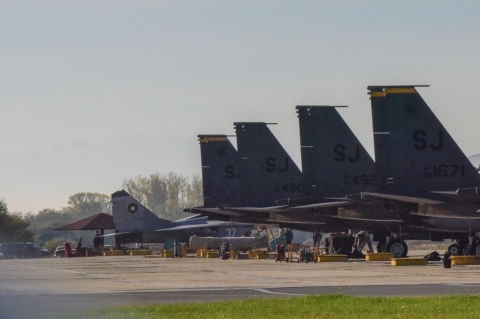 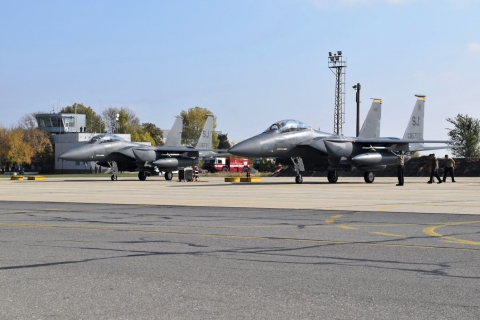 At this moment it is not known where the Strike Eagle ACE will turn up before they will fly back to the Continental United States (CONUS).