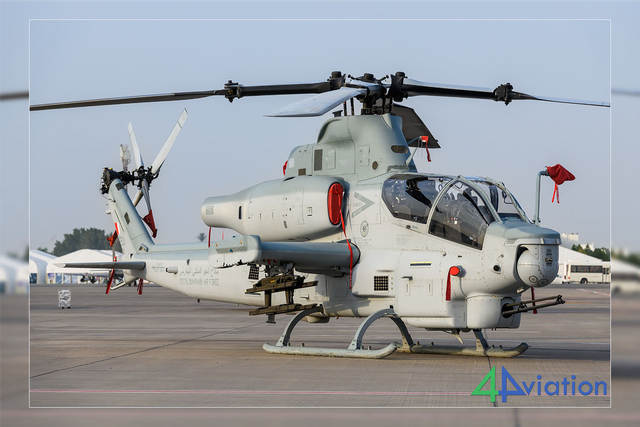 At the Bahrain International Air Show, which was held at Sakhir air base from 9 to 11 November 2022, two new Royal Bahrain Air Force (RBAF) Bell AH-1 attack helicopters where showcased.

One was a grey coloured AH-1Z Viper, serial 2201, which is a new built example of the twelve production aircraft from the 2019 Foreign Military Sales (FMS) contract.

The RBAF ordered the AH-1Z Viper in 2018 and on 7 February 2019, a USD 240 million modification contract for the manufacture and delivery of twelve AH-1Z Viper (Lot 16) attack helicopters was awarded to Bell Helicopter Textron Inc., Fort Worth (TX).

On 26 July 2022 the first two Vipers were collected from Amarillo (TX) by a United Arab Emirates Air Force (UAE AF) C-17A Globemaster III and flown to Bahrain. In total six AH-1Zs have been delivered by November 2022. The Vipers are most likely joining 22 squadron. 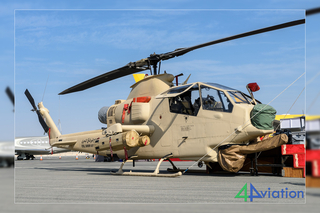 The other example was a sand coloured AH-1FB, serial 934, which is a modified older model AH-1F Cobra. It is reported that this version is equipped with a new turret on the nose amongst other modifications. In 2015, Turkish Aerospace Industries (TAI) and Aselsan signed a USD 24 million contract with Bahrain to upgrade their AH-1 Cobra attack helicopters. TAI and Aselsan were expected to integrate the mission computer and some avionics from Turkey’s T129 Atak helicopter and equip the Cobras with Roketsan weapons.

It is not known how many AH-1Fs will undergo the upgrade programme.