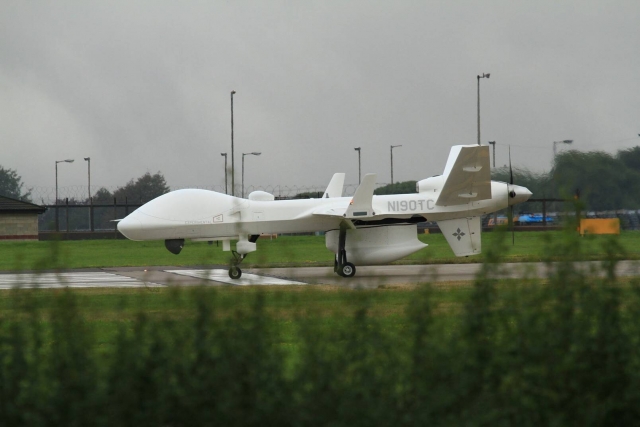 On 7 February 2021, Scramble Magazine reported on the participation of a MQ-9B SkyGuardian Unmanned Combat Aerial System (UCAS) to the Joint Warrior 2021-2 (JW212) exercise.

The prototype SkyGuardian, registered N190TC, was originally expected to arrive in the UK in July 2021, but finally arrived last weekend at RAF Waddington. The UCAS will demonstrate the aircraft’s operational capabilities to NATO allies, including the Netherlands. Next to that, the aircraft will participate in JW212, which will will be held from 26 September to 8 October 2021.

The UK Ministry of Defence (MoD) signed a contract with General Atomics Aeronautical Systems, Inc. (GA‑ASI) for manufacture and delivery of sixteen Protector RG1. In 2020, the first three Protector RG1 systems (three aircraft, three ground control stations and supporting equipment) were ordered as the first phase of the acquisition. In July 2021, the MoD signed a USD 364 million deal to procure additional thirteen Protectors for the RAF.

The UCAS is designed to provide critical surveillance capability for the RAF, equipped with a suite of surveillance equipment and precision strike weapons, which include the locally-produced Brimstone missile and Paveway IV Laser Guided Bomb. The SkyGuardians will also be built with advanced anti-icing and lightning protection to support operations in challenging weather conditions. The fleet will be operated from RAF Waddington, with the first aircraft scheduled to be delivered in 2023.

The SkyGuardian flights are to be conducted between August and September from RAF Waddington, before moving to RAF Lossiemouth until the end of October.