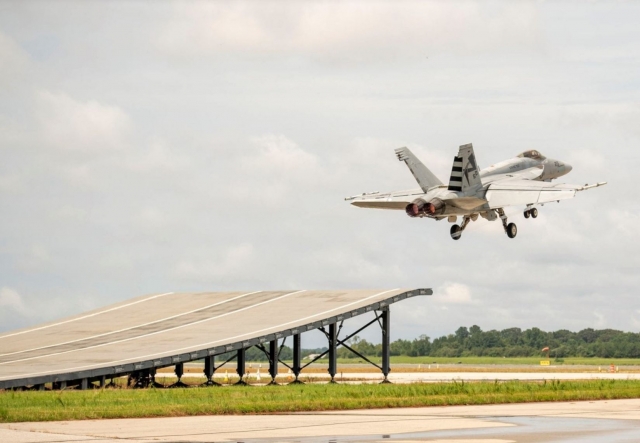 On 21 December 2020, Boeing and the US Navy demonstrated that the F/A-18E/F Super Hornet is able to operate from a “ski jump” ramp. With the demonstration, both show that the Rhino is suitable for operations from India’s aircraft carriers.

“The first successful and safe launch of the F/A-18 Super Hornet from a ski jump begins the validation process to operate effectively from Indian navy aircraft carriers,” said Ankur Kanaglekar, India fighter sales lead for Boeing. “The F/A-18 Block III Super Hornet will not only provide superior warfighting capability to the Indian navy, but also create opportunities for cooperation in naval aviation between the United States and India.” The Indian Navy has one operational aircraft carrier (INS Vikramaditya) while another one, INS Vikrant, is under construction at the Cochin Shipyard Limited (CSL) dock and is expected to join service in the next few years.

The Indian Naval Air Arm is currently evaluating its new fighter options. If it selects the Super Hornet Block III, the Indian government could benefit from billions of dollars invested in new technologies by the US Navy and others. Those technologies include advanced networking, longer range through conformal fuel tanks, infrared search and track, and a new advanced cockpit system. Boeing’s Block III and accompanying services play an important role in mission-readiness for the Indian Air Force and Navy. Boeing is focused on delivering the aircraft to Indian customers and hopes to get the contract. India is reported to choose a new fighter in 2021. The country invited already back in 2017 proposals for 57 aircraft for its aircraft carriers, while the Air Force requires 100 aircraft. Contenders for the Super Hornet are India's own Tejas (a navalized version is being teste)d and a modified version of the Rafale M F3R standard.

The ski-jump demonstrations follow the delivery of two Block III flight-test aircraft to Pax River in June 2020. Boeing is on contract to deliver Block IIIs to the US Navy, starting from 2021. The new Super Hornet provides the most weapons at range in the US Navy’s fighter inventory, including five times more air-to-ground and twice the air-to-air weapons capacity.

Photo by US Navy