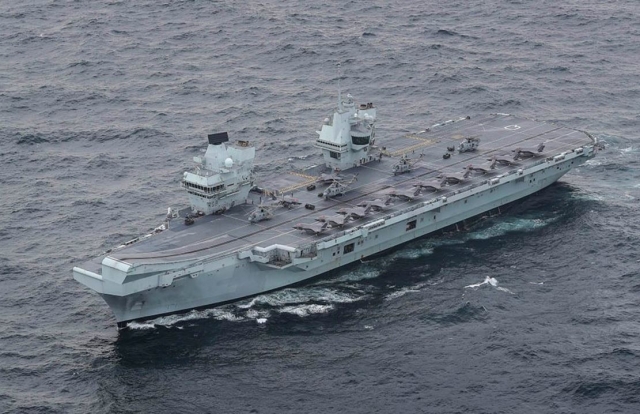 The UK’s Carrier Strike Group (CSG) has has reached Initial Operating Capability (IOC) ahead of its first operational deployment that will start later this year.

With the IOC, all elements of the CSG (HMS Queen Elizabeth, ship's personnel, Lightning IIs,  Merlins and their pilots, radar systems, weapons, Anti-Submarine Warfare capabilities and so on) have been successfully brought together and are able to operate in a war-time modus without any outside help.

Following the success of the NATO Joint Warrior Exercises in 2020 (with thirteen allied countries), the CGS capability has reached the key IOC milestone for the programme on schedule. This will lead to the first operational deployment in which HMS Queen Elizabeth is planned to sail in the Mediterranean Sea, with a transit through the Suez Channel and Red Sea before entering the North Arabian Sea and the Persian Gulf. The QE will end up its deployment in the Pacific (in waters near Japan) before returning home. Twenty-four F-35Bs of the Royal Air Force/ Navy and US Marine Cops will embark the ship as well as a number of Merlins. The CGS will exist out of two Type 45 destroyers, two Type 23 frigates, a nuclear submarine, a Tide-class tanker and RFA Fort Victoria.

After its return, the CGS continues it work-ups that will lead to Full Operating Capability in December 2023.

In the meantime, China is already protesting that QE CGS will navigate through the disputed South China Sea region on her maiden deployment. The UK government replied that it shows interests in the region and is committed to maintaining regional security, including asserting its rights to freedom of navigation and overflight as laid out in UNCLOS.