Santos Dumont airfield is a busy airport with lots of internal flights coming and going. Also, the air force has its calibration and flight check unit here. Lastly, biz jets and light aviation can be found here.

The airfield is surrounded by water on three sides, the north, east, and south. The terminal is located halfway down the runway on the west side. Just north west of the terminal there is a big hangar. This is spilt in two halves; the southern half is used by biz jets while the northern half houses the FAB unit GEIV.

The airport is at the waterfront in down-town Rio de Janeiro. From Galeão take the Linha Vermelho express way all the way south until it ends. Make a left onto Av. Pres. Vargas. This will end at Av. Gen. Justo, make a right and you will have the airport to your left.

If you arrive from the east, for example from the direction of São Pedro da Aldeia, take the Ponta Pres. Costa e Silva. You will still be on BR-101. After the bridge go left onto Av. Rodrigues Alves. This will follow the waterfront, although you will not be able to see much of it, and become Av. Gen. Justo that takes you to the airport.

When arriving from the south or west, you will be on Av. das Américas which becomes Av. Min. Ivan Lins. After the first tunnel you will have to choose between two routes. The northern most will take you on Auto Estrada Lagoa, past Lagoa Rodrigo de Freitas on the north shore and through the long Tunnel Robouças. After that you will have to make a right onto Av. Alexandrino and follow that until you reach Av. Gen. Justo. The southern route follows the shore line. In that case you will be on the Av. Mendes de Morais, that becomes Av. Niemeyer, Av. Vieira Souto, and Av. Atlantica. You will pass Leblon, Ipanema and Copacabana beaches and make a left after that through the Eng.C. Sintra tunnel. You are now on Av. Princ. Isabel, after a sharp right hand and left hand turn you will be on Av. Infante Dom Henrique. Follow that to the airport.

From the terminal viewing area good views used to be possible. However, in 2005/2006 the terminal was rebuilt and a series of gates were constructed. These now largely obscure your view. Now you need te be checked-in and even then you have to cope with green glass which is bend also.

Just outside and to the north of the civil terminal, the GEIV hangar and ramp can be found. Having a look on both sides will always bring you some of their aircraft. Views into the hangar are also possible, the north side belongs to GEIV. Some VIP aircraft are parked here as well.

Exit the airport and take the Av. Alm. Silvio de Noronha. This runs along the waterfront, following the airfield perimeter. You can watch the aircraft approaching 02L here.

A bit further down Silvio Noronha, you can take stunning photographs of aircraft braking heavily before they run out of runway while landing on 20L. Also, aircraft taxiing towards the threshold of runway 02R can be spotted with ease from here. In the morning, spot 4 is okay for the aircraft approaching 02R.

Continuing on Silvio Noronha, not going over the bridge but following the perimeter, will take you to a spot were you can view the aircraft taking off from both 02R and 20L. 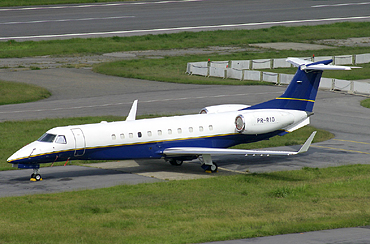 From the terminal, spot 1. (Fabio Laranjeira) 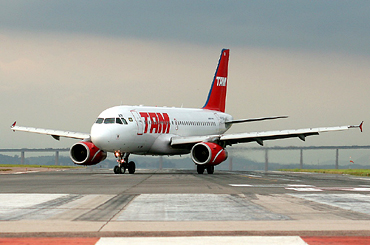 From the rwy 02R threshold between spots 3 and 4. (Fabio Laranjeira)