Cairo International airport is a busy airfield situated on the north eastern outskirts of town. Apart from many domestic and international civil traffic, the airfield also houses the Egyptian Air Force's transport fleet.

Be aware, plane spotting is neither understood nor appreciated in Egypt!

The airfield has been expanding in recent years. There used to be three runways, two north east-south west ones, and a north-south one. The fourth runway was constructed recently as was terminal 3. The end result will be three parallel runways.

Terminal 1 is south of runway 05L/23R, facing north. Along taxi track Alpha, that runs south parallel to 16/34, there is a cargo ramp. Further south, terminal 2 is located facing south east. Lastly, heading west again, new terminal 3 and some remote parking ramps are facing south. The new developments, like the extra runway and cargo village, are on the south east side of the airfield. The military are on a ramp on the east side of runway 16/34. Lastly, the business jet terminal, officially terminal 4, is near the threshold of 05L, to the west of terminal 1.

Traffic uses 05L for departure only, and 23R for arrival only. Runway 05C/23C, formerly 05R/23L, is the main runway used in both directions. The newly constructed 05R/23L will alleviate the use of the other runways. As of July 2010 it was not open yet. After opening, runway 16/34 will be closed altogether.

The airfield is signposted and conveniently perched on the eastern ring road. The Cairo-El Ismailiyah Desert road is nearby too.

From terminal 3, only the hard stands on the adjacent ramp between the gates can be seen from air side. The restaurant area is the best option, you can also catch a glimpse of runway 05C. As the terminal is facing south, no views of the central and northern ramps in front of terminals 2 and 1 are possible unfortunately.

There are plans to reconstruct and extend terminal 2. From air side you can only see the stands and part of the taxiway north of runway 05C/23C.

This was the old international terminal and is now used for domestic flights only. It still takes some international traffic too. So if you are lucky, T1 is used. It offers views of the northern ramps and 05L/23R as well and is by fare the most spotter-friendly of the terminals albeit on air side only.

Spotting from outside the airport is not easy. Keep right upon exiting the airport from terminal 1, you will under pass the fly-over, make a right again. You will be driving along the airfield perimeter. Fenced off, a line of bushes and guards make it impossible to just walk along the fence. Probably your best bet is to keep right instead of going on the fly-over, make a u-turn and drive back on the other side. There is a tiling and bathroom store. Park your car there. From the divider you can watch the traffic, the bushes on the airfield are less dense here and the aircraft will have cleared the fence. Not ideal, and only after 3 p.m.

Follow the description of spot 4, but do not make a u-turn underneath the fly-over, keep right instead. After about 400 metres, after the Nissan car dealer, there is a barren patch of land to your left. This is just before the airfield fence becomes a wall. From this patch you can easily read off the Hercules, best late afternoon. Also, you can watch departing traffic of runway 05L although they are very high. Approaching aircraft for runway 23R are very close.
Beware, because you are right opposite a watch tower!

The Cairo Eastern Ring road has been reconstructed to make a wider turn around the eastern part of the airfield. At the point were the new road starts, there is a petrol station. This is right underneath the approach to runway 23C. We do not know what will happen to this spot or the old ring road, but they will probably just throw some concrete blocks on it, enabling you to walk a bit east for morning light..

By far the busiest runway is 05C. Unfortunately, on the south side it is virtually impossible to spot. Desert, military barracks and closed off industrial estates block your view or access to good spots. One possibility is near Almaza airport. North east of that, along El Nasr road, there is a small hill. Exiting the airport from terminal 3, go on the fly-over and keep left. The road bends right, immediately after the petrol station there is a small street, go right there. The street bends left, go up the sand track onto the hill. You will be about 200 metres north of the centre line and 1.7 km from the threshold. Only good late afternoon.
Alternatively, park at the petrol station, you will be a bit closer but lower then.

Runway 05C/23C is the runway of choice with 05C receiving most arriving traffic. With a left hand side window seat, you will turn in over the Gizeh pyramids. During final approach you will have an overview of nearby Almaza air base, see the Almaza airfield guide. Most international arrivals on 05C leave the runway at high speed exit Victor, just before leaving the runway you can clearly see some stored airlines which are north of taxiway Tango. A right hand seat will be better once you are on the taxi way, because you will subsequently taxi past them at 30° 7'14.02"N, 31°25'8.79"E.

Because runway 05L is only used for departing traffic, you have to make a choice, or a gamble, should you land on 23R. In that case, you will taxi on taxiway Alpha past the terminal 1 hard stands. Most international arrivals will also pass the cargo ramp and terminal 2, before making a right to terminal 3. If you sit on the right hand side, you will pot a lot of parked aircraft. If you sit left, the row of Hercules transports will be visible, on landing and while taxiing south. 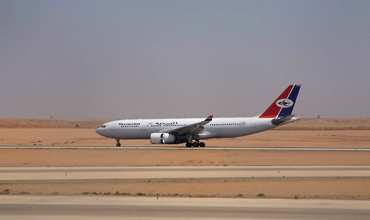 Yemenia A330-200 7O-ADT rolling out after landing on runway 05C. Photo taken from an aircraft that just did the same, while taxiing back parallel to the runway (taxi track Tango, Erwin).

If you are lucky, your transfer bus allows a peek of the Hercules flight line opposite terminal 1. (Patrick)