The history of Châteauroux's main aiport goes back to 1936 when Marcel Bloch, later named Marcel Dassault, established an aircraft factory here, in a building that still exists. After WW2, the field saw extensive use by US forces. Nowadays, traffic at the airport is rather slow, but it puts quality over quantity. The airport is specialized in air freight, houses a number of maintenance companies and offers ample space to store aircraft. Due to its central location, profitable climate and long runway, both military and commercial aircraft use the airport for training purposes. Among the former, tanker aircraft find their way here regularly as the "Simone" air-to-air refueling track lies immediately west of the airfield.

The 3500m runway, able to handle any size of aircraft, runs nortwest to southeast. Most activity takes place on the southwest side of the airfield. The aprons there can be viewed from outside the fence with ease, although it may require some effort to peek into every corner. The southeast side of the field hosts C2FPA, the French airport firefighters' centre, using a Boeing 747 and a Mirage 2000 along various mock-ups. Additional aprons on this side, essentially large dispersals, can mostly be viewed as well.

The airport can be reached easily from the A20 motorway. Take exit 12 and continue along the N151. On the first roundabout, follow the signs and take the D920 that brings you directly to the field.

A large part of the northern apron is visible from this area. One can walk along the fence from the crash gate up to the platform near the ATC tower. Parking space for cars is ample here.

By some zigzagging in the industrial part of the airfield, along the Rue Blériot behind the old Bloch factory building, additional views of parts of the northern apron can be had. A blind alley further down the road offers a view between hangars as well, although it may be partially blocked by handling equipment and the likes. To get to the area itself, called Zone Industrielle Aéroportuaire (ZIAP), enter the airport grounds either at spot 1 and take the road signposted for ZIAP (the one closest to the D920), or at spot 3 and then first left (before the roundabout).

Just behind the lovely 1930s architecture of the old main entrance (now only marked Z.I. Aéroport on small, low-placed signs) and terminal buildings lies a parking lot free of charge. It can be reached via the Rue Sud Aviation, that runs around the buildings. At the end of the parking lot is a tree line and the terrain is somewhat elevated. That spot offers a good view on the taxiway, runway and on the northern apron as well. Walking to the southern edge of the lot produces a clear view on the southern apron. Light for photos is best in the afternoon.

This spot is opposite from the showy M.A.CH 36 music venue, across the Avenue Marcel Dassault/D920. It can be reached from spot 3 via the Rue Georges Clémenceau, that runs parallel to the D920 along the air cargo buildings, as well as via the roundabout south of M.A.CH 36, via a short stretch of the Rue Védrine. A car can be parked here for a while and stored aircraft on the nearby apron captured on camera, provided one brings a wide angle lens. An old piece of road runs from the Rue Clément Ader to the fence and that spot offers a view on the runway.

This small road, also called Rue Védrine, crosses the centreline close to the 03 threshold. To get here from spot 4, drive south again, turn left on the 'major' Rue Védrine and left again to continue along the fence. Parking space is very limited here and at least partially forbidden (near the centreline), so it may be wise to only park near the beginning or end of this stretch of road. A very short walk then covers places to stay in all light conditions, to photograph aircraft on finals for runway 03. Traffic departing in the opposite direction can be seen from here as well, but you might find those planes being already too high for decent pictures.

From spot 5, the shortest way here is to continue counter-clockwise along the southern edge of the field. Alternatively, the Chemin de la Fleuranderie takes you to the junction at the fence between spots 5 and 6, from the Rue Védrines where that parallels the N151 (no direct connection to the main road there). From said junction, the perimeter roads in both directions are probably marked no-entry. To respect that - and probably save you from a punctured tire - it is advised to park near the junction and walk the rest to check out the eastern aprons on this side of the red and white warehouse.

Please be warned that spotting near the airport firefighters' centre C2FPA has led to problems with security. If you still want to take a look there, approach the area along La Malterie industrial estate. Take the N151 between Déols and Rosier and leave it via the roundabout west of Rosier, direction Z.I. La Malterie. Turn right at one of the roundabouts and left again along the railroad tracks. Arriving at (crash) gate 8, a right turn brings you to C2FPA. From there, the dirt road along the fence offers some views on the eastern aprons and the assests of the firefighters.

If wind conditions are favorable, this spot next to the D80 is a great place to photograph aircraft on short finals for runway 21 all day long. There is ample space to move around and get some dramatic pictures: up close with a wide angle lens or somewhat further away with a telephoto lens. Cars can be parked along the road running parallel to the fence.

Just south of the village of (Saint Pierre de) Notz, a dirt track leads to the fence abeam the northern runway threshold. Cars can be left along the road or in the village. The sun is behind you here from the afternoon on.

From spot 8, this is the next track towards the fence, 900m down the road. From spot 1, leave the airport to the north via the D920. Having passed through the village of Céré, turn right towards the water tower. Park at the end of this road near the T-junction. A short walk brings you to the fence where traffic using the northernmost taxiway can be seen. The runway is partly obscured from this spot, by elevated terrain. The sun is in one's back here in the afternoon. When in good shape (or working on that), it is possible to walk all along the fence to the northern apron for photos of stored airliners over there.

Whether you go for fast food or a more decent meal among the offerings along the Avenue George Hennequin, it is advisable to keep your camera at hand when in that area. There is a fair chance of capturing nice banking shots if larger aircraft practise circuits at the airport. 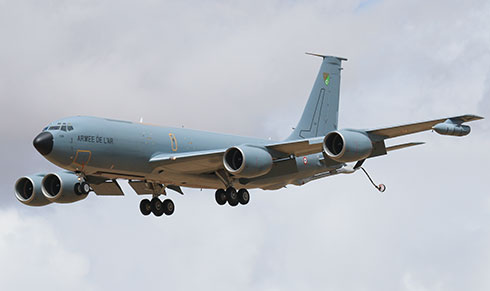 Aircraft on finals for runway 21 can be photographed throughout the day at spot 7. (Gerben Hazebroek) 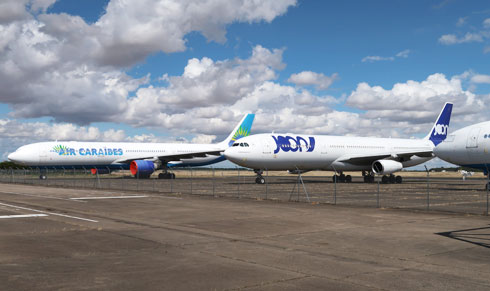 Stored A330s on the southern apron, photographed from spot 4 by Gerben Hazebroek.