Of the two Milan airports Malpensa is the one with growth potential, and the biggest one indeed. To accommodate for increasing capacity a location no less than 40 km northwest of the city centre was chosen. Obviously Alitalia dominates traffic, together with a few other Italian companies. International flights comprise mostly European airlines, including some cargo/parcel carriers. AgustaWestland has its headquarters on the field and helicopters are also operated here by the police and fire brigade.

Photography is not always easy at Malpensa but the spotting is good. However, our hobby is hardly understood and not always appreciated in Italy. At this airport, police have told spotters to move on and even fined them. In recent years, the situation seems to have improved, possibly thanks to an active local group of enthusiasts. Still please behave in a responsible manner and stay away from sensitive areas. Try not to attract attention.

The airport lies in flat terrain, just south of the foothills of the Italian Alps. Two parallel runways have one terminal between their northern ends (Terminal 2) and one on the west side (Terminal 1). Runways 35L and 35R are mostly preferred. Normally 35L is used for landings and 35R for departures. At exactly 15.00 hours in the afternoon, this is switched. There is no such switch for runways 17L and 17R: 17L is for take-offs, 17R for landings.
More handling areas, including a large cargo centre, are on this side of the field. The AgustaWestland headquarters have their own area on the east side and the Vigili del Fuoco resides south of that. The perimeter is partially quite far from the runways and partly lined with forest and other barriers, leaving just a few spots along the fence to be useful.

Malpensa has the ground connections you would expect from an airport this size. Highway SS336 connects to the A8, straight to the city centre. Terminal 1 has a train station, also with direct connections to the city and multiple bus lines run to a lot of neighbouring towns and villages. However, the spotting points on the east side of the airport cannot be reached by public transport, so you will need a car for them.

OK for logging numbers but very limited for photos. Probably the best place to have a look at the Agusta aprons on the other side as these are shielded by buildings from the vicinity of spot 8. Close to the McDonald's pictures can be taken through mildly tinted glass. There are two outside terraces at the departure level where some shots can be made without glass. Outside the building some of the planes on the A platform can be photographed through a fence, if your lens is smaller than the maze.
Next to the terminal is the Volandia Museum (see link to the right). To reach it, go outside at the departure level, at exit no.17. Then walk the way outside the airport till the pedestrian bridge, which takes to the museum.

While the vantage point next to the Alitalia crew centre is not as good as it was, it is still usable in the afternoon, when runway 35L is used for take-offs. These aircraft can be photographed from the parking lot, when they have climbed over the fence. However, some aircraft may already be too high for decent pictures. This spot also good for taking photos of aircraft that have landed on runway 35R and are taxiing to the terminal. Note that blast fences and red-white road blocks obstruct the view, so the window of opportunity is small.
Parking your own car is not possible here, except for a couple of spots on the shoulder of the road.

The state police have one of their flying units here and the helicopters and a Partenavia may be seen outside. Views on the apron from the road are partly obscured by fences and bushes. Photography is probably not advisable.

This terminal is almost exclusively used by easyJet, and partly by charter companies. The view for non-passengers from within the building is very limited but spot 4 just outside, along the road to Terminal 1, at the right side of the arrivals building, has an overview of half the main apron. Planes on the closest stands, usually medium aircraft of Italian charter companies, can be photographed. The light is far from perfect except for summer evenings or late afternoons.

Not a spotting point for the airport but an exhibition on the history of this world famous helicopter manufacturer. Various rotorcraft and other items are displayed both outside and inside.

A footpath leads from spot 7 along the fence and through the woods, past the fire fighters and around the corner. The spot you reach is closer to the runway than spot 7 but has a high fence with rolls of barbed wire on top of it. A ladder will give an unobstructed view but this is prone to upset security. The forest has its pros (shadow) and cons (mosquitos) but this can be a rather nice place to spend some time.

To get here, continue north (or go back) from spot 8 to the sharp right turn in the road, next to a crash gate. Although parking is possible here, there are no parking signs, so this is at your own risk. If you want to avoid a hassle, park on the edge of Ferno village and walk back to the fence. Use either steps or the rising terrain to look over the fence.

The closest highway exit to this spot is the one for Malpensa Cargo City. From there follow the signs to Ferno and Lonate Pozzolo (via SP14dir). Turn left after passing the second set of approach lights on your left, the road rises to cross over the railway. This bridge is your vantage point, parking has to be done a little further along the road, in the village of Ferno, or somewhat further south. Spotting is OK all day, photography only in the morning.

This spot located on an unpaved path next to Via Moninelli and is useful in the afternoon, if airplanes are landing on runway 35L. You can recognise it by a fortified tower used during WW2. The spot is safe as long as you park your car out of the road and in a way that the unpaved path is not blocked. Also, be careful not to block the secondary entrance gates to the airport.
Note that this spot is also next to the new taxiway H around the threshold of runway 35L. However, there are double fences, rendering this spot useless for photography.

This spot is an alternative for the spot near the Alitalia crew centre north of Terminal 1 (spot 2). It could be useful for taking photos of aircraft taxiing towards the south on the closest taxiway. For this spot you can park for free on a lot south of the marker on the map. The spot itself is in between the parking and the terminal. However, the police may send you away here. 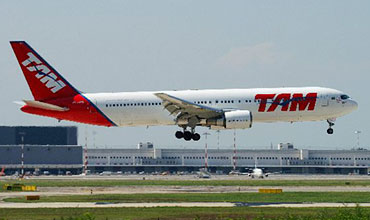 B767 of TAM Brasil, landing on 35R and photographed by Marco van Halum from spot 7. 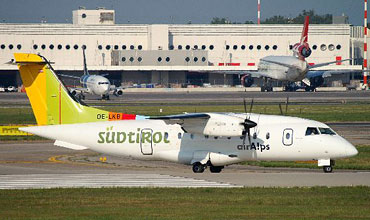