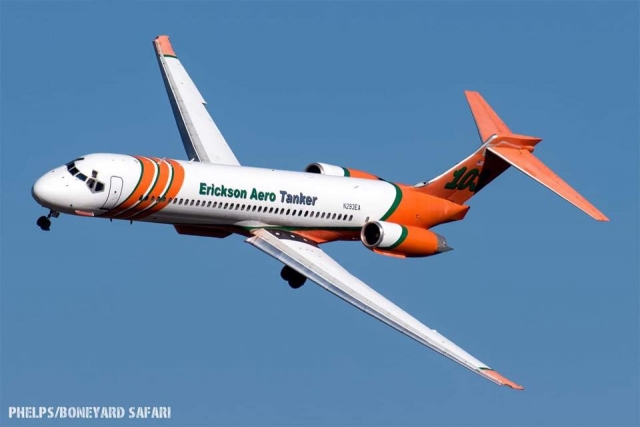 Although the reason for these aircraft to come into action never means much good, it does sometimes provide nice photo opportunities. At this moment an impressive number of wildfires are raging in the western United States and Dylan Phelps of Boneyard Safari ventured to Redmond and Medford (OR) to catch some of the planes involved in firefighting. He provided us with some very fine shots.

MD-87 N293EA “Tanker 103” has been flying with Erickson Aero Tanker as a firefighting aircraft since May 2014. It has c/n 53209 and was originally delivered to Iberia as EC-635 in June 1991 and was reregistered as EC-FFA in September of the same year. It was phased out in April 2012 and was scheduled to go to SAS as SE-DMN. The aircraft was actually registered as such, but in July 2012 it moved to Erickson for conversion to firefighter.

The impressive DC-7B you see taking off is “Tanker 60”, which is N838D, also flown by Erickson Aero Tanker. It is, in fact, the very last flying DC-7 in the world. It is currently in its final firefighting season, as it is slated to be retired. This beautiful aircraft is a vintage 1958 Douglas product and has always carried the same registration. It was first delivered to Eastern Air Lines in February 1958, which used it until 1966 when it moved to California Airmotive. In the same year it switched to Skyway Travellers and two years later it moved to Thompson Flying Services. It started firefighting as early as 1973, when it became part of the fleet of TBM. That is when it received the “Tanker 60” code. In 1991 it moved to NV-BLM Sierra Front. In 2007 it was acquired by Butler Aircraft Company and in 2010 by Garnick Holdings. In 2012 Corsair Two became the new owner, before eventually ending up in the fleet of Erickson in 2014. 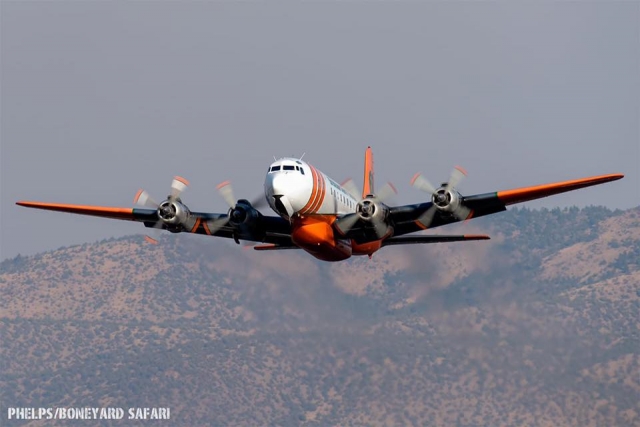 The Convair 580 is C-FKFA of Conair and is flying as “Tanker 52”. It has been part of the fleet of Conair since 2003. It started its flying career in August 1953 when it was delivered to Delta Air Lines as N4810C as a Convair 340. It was converted to a 440 a few years later. The Convair moved to North Central Airlines as N4810C in August 1961 after being converted into a Convair 580. In 1977 it moved to Canada to fly with Quebecair as C-FKFA, but moved back to the USA in 1984 when it changed to Seair Airmotive as N5807. In 1991 it returned to Canada to fly with Kelowna Flightcraft Air Charter, once again as C-FKFA. It did so until 2003. 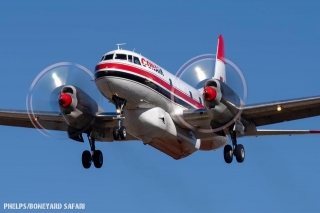 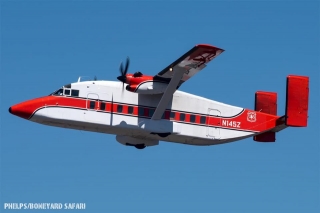