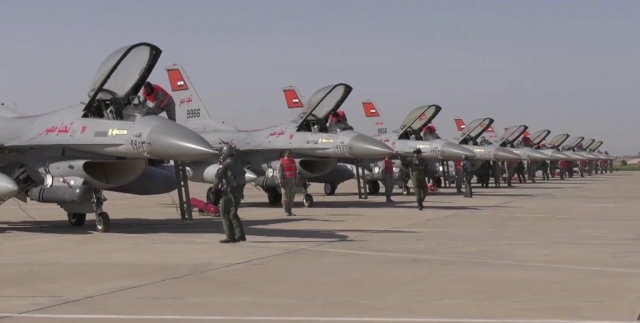 Related to the number of participating countries and forces, Bright Star is one of the most important and largest army training exercises in the world for decades. It is the icon of training for the Egyptian Army.

The exercise is held every two years. It is a series of combined and joint training exercises led by United States and Egyptian forces in Egypt.

These exercises were held for the first time in 1980, and have their roots in the Camp David Accords. After its signing, the military forces of Egypt and the US agreed to conduct coalition training in Egypt. Because of the shown strength and realism of the exercise, many countries that wanted to train fighting in desert conditions were attracted to join. 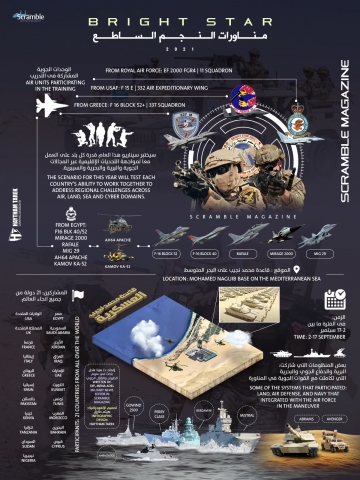 This year's exercise was held from 2 to 17 September 2021 and was kicked off at Muhammad Naguib Military base in the northern Matrouh governorate on the Mediterranean coast. In total 21 countries participated in the various combat scenarios on land, sea and air. Bright Star 2021 was built on the success of Bright Star 2018, which was originally scheduled for 2020, but postponed due to the COVID-19 pandemic. The participating air units came from Egypt, the US, Greece and the United Kingdom.

The exercise consisted of three main segments: affiliation training, a computer-aided command post exercise, and a field training exercise. This training is based on the scenario of regular wars from the beginning until the year 2003, which included unusual wars and counter-terrorism and continues to the 2021 version, which reflects the constant renewal of the scenario for training in line with the latest developments in the current wars.

The scenario for the exercise was developped in the 1999/2000 version and involves 'Orangeland' (the enemy) located in the western half of Egypt, and 'Greenland' (an ally) in the eastern half. Orangeland, which has been hostile toward Greenland for several years, invaded Greenland a few months ago so that they could have access to the waterways of the Nile. They got halfway to the Nile before Greenland could stop them, but Greenland couldn't push them back out of the country.

The coalition came to help. During the air combat affiliation training, a three-day air campaign was conducted in which the coalition air forces took out some of Orangeland's defenses using simulated weapons. Meanwhile, friendly forces pushed Orangeland out of Greenland. The largest joint coalition event is the Amphibious Assault Demonstration.