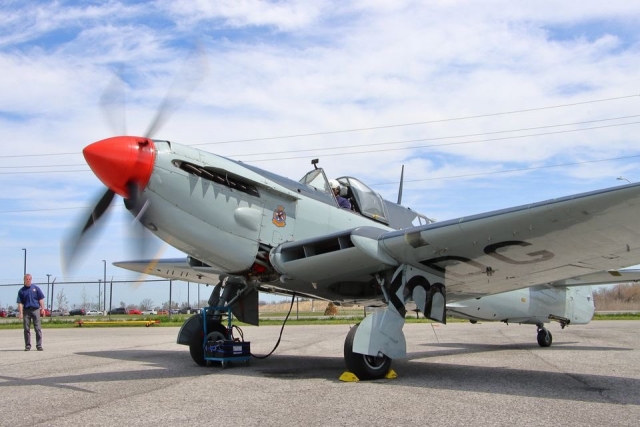 Earlier this week, on 10 May 2022, the Rolls Royce Griffon 74 engine of Fairey Firefly C-GBDG was fired up for the first time since November 2013.

The naval fighter is part of the inventory of the Canadian Warplane Heritage Museum in Hamilton (ONT), Canada. The recent engine startup is one of the final stages on the way to a renewed airworthiness.

The Firefly is the former Royal Australian Navy Mk.VI WH632 (c/n F.8755). The RAN disposed of the fighter in 1960 and it was then stored. After six years, WH632 was sold to the Camden Aviation Museum, Camden (NSW), Australia.

In 1978 the machine was acquired by the CWHM, where a restoration to airworthy condition was taken up at Victoria (BC). The Firefly was registered as C-GBDG and painted in the colours of the Royal Canadian Navy as ‘VH142’ with code ‘BD-G’. It unfortunately crashed on its delivery flight to Hamilton on 6 May 1992. But ‘Delta-Golf’ was repaired and flew again three years later. C-GBDG was grounded in 2013 and subject of renewed restoration. However the end of this restoration is now near!