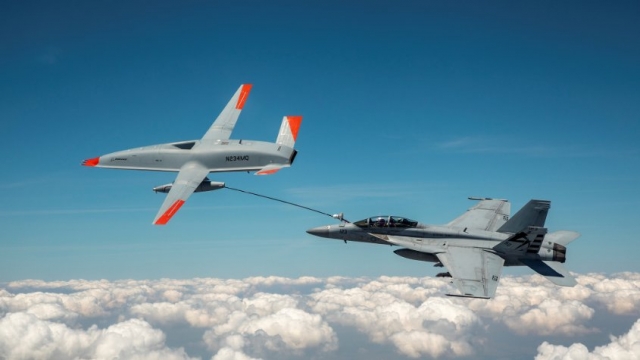 During the flight, the Super Hornet receiver approached the Boeing-owned Stingray test asset, conducted a formation evaluation, wake survey, drogue tracking and then plugged in with the unmanned aircraft. T1 then successfully transferred fuel from its Aerial Refueling Store (ARS) to the Rhino. 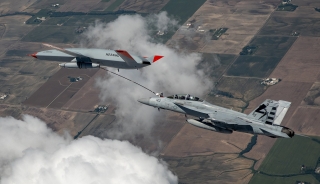 The MQ-25A will greatly increase the range and endurance of the future carrier air wing and relieve some Super Hornets within the Wing from their aerial refueling tasks.

The test flight will provide important early data on airwake interactions, as well as guidance and control. Boeing will analyse that data to determine if any adjustments are needed and make software updates early.

Testing with T1 will continue over the next several months to include flight envelope expansion, engine testing, and deck handling demonstrations aboard an aircraft carrier out of Norfolk (VA) later this year.

Besides refueling, the MQ-25A will be the world’s first operational carrier-based unmanned aircraft and provide critical aerial refueling as well as intelligence, surveillance and reconnaissance (ISR) capabilities. 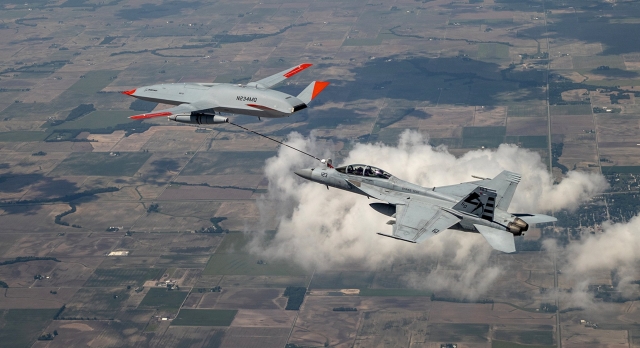 T1 is a predecessor to the Engineering Manufacturing Development (EMD) model series. The prototype is being used for early learning and discovery, laying the foundation for further development and tests of the first three System Demonstration Test Articles (SDTAs) that were ordered by the US Naval Air Systems Command.

The US Navy has now ordered seven Stingrays, which are expected to be completed by August 2024. The first four Engineering Development Model (EDM) aircraft were ordered in an USD 805 million contract awarded in August 2018, when the Boeing design was selected as the winner of the carrier-based aerial refueling system (CBARS) competition. The US Navy is planning for 76 MQ-25As, worth USD 1,3 billion, with Initial Operating Capability in 2025.

On 10 December 2020, Scramble Magazine reported on the first test flight of the ARS equipped MQ-25A.