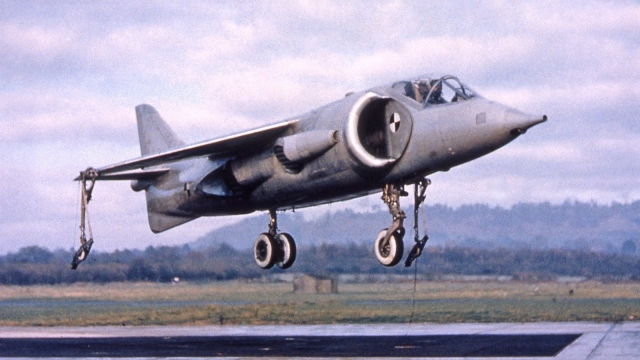 The Hawker P.1127 design led to the Hawker Siddeley Harrier production aircraft. Its development started in 1957 and aircraft testing began in July 1960. Today, sixty years ago, on 21 October 1960, the first hover took place of this remarkably and (eventually) succesful jet fighter.

The Hawker Siddeley Harrier was the first of the Harrier Jump Jet series as the first operational ground attack and reconnaissance aircraft with Vertical / Short Take-off and Landing (V/STOL) capabilities. For many years, it was the only truly V/STOL design of that era.

Eventually, 118 Harrier GR1/GR3s and 25 Harrier T2/T2A/T4/T4A twin seaters were built for the Royal Air Force, 74 Sea Harriers FRS1/FRS51 for the Royal navy. twenty for the Indian Navy, 102 AV-8A Harriers and eight TAV-8As were ordered by the US Marine Corps and ten AV-8S and two TAV-8S Matadors were sold to the Spanish Navy (these were later transferred to the Thai Navy).

The original Harrier was further developed which led to the McDonnell Douglas (T)AV-8B Harrier II designs of which 449 were sold to the USMC,  22 (T)EAV-8Bs for the Spanish Navy and eighteen (T)AV-8B for the Italian Navy.