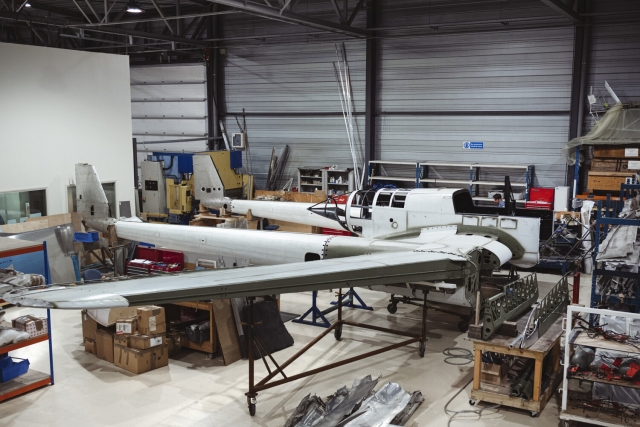 The Aircraft Restoration Company (ARCO) at Duxford (UK) has finally raised the curtain on one of its best kept secrets: the restoration project of a Focke-Wulf Fw189. The machine, (Werke Nr 2100), is believed to be the sole surviving example of this distinctive type, from the 846 that were built.

The twin-boom, twin engine, heavily glazed aircraft was the main reconnaissance type used by the German Forces on the Eastern Front during WWII and was known as 'Uhu' ('Eagle Owl') or 'The Flying Eye'. The Russians nicknamed it 'Rama' ('Frame') because of its slender exterior.

The Fw189 usually carried a crew of three, with a maximum speed of 217 mph and an operating range of just over 400 miles. It could capture photographs from the camera built in to the fuselage and in the role of reconnaissance the type was superb. 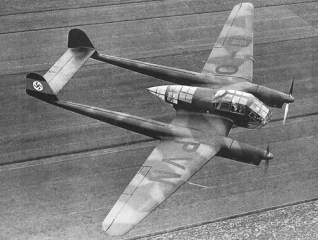 The 'Uhu' combined all the attributes required on the Eastern Front – strength, maneuverability, toughness and reliability, with the capability to operate from short and unpaved airstrips.

The aircraft is thought to be the fourth of ten Fw189s produced by Aero in Prague in 1941. It was first flown as an Fw189-A1 on 23 July 1941. Certified airworthy, it was passed on to the short range army cooperation unit which would take it into action.

It served as an army cooperation aircraft for two years leading up to its last flight during which time it was believed to be upgraded to A2 specification. 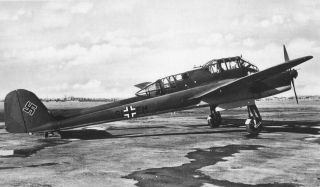 In the morning of 4 May 1943, the crew took off for a mission to photograph Loukhi III air base from an altitude of 20,000ft and then continue north up the Murmansk-Leningrad Railway. Within half an hour the Fw189 was downed by a Russian Hurricane fighter. Two crewmembers were killed, but the pilot, Mothes, survived not only the crash but even the war.

Russian reports state that the wreckage was found some hours later having come down in forest near Loukhi, south of Murmansk, Russia. It was there, in Arctic conditions, that the aircraft remained for 52 years. The 189 was recovered from the forest by helicopter, such was the inaccessibility of the site and transported back to the UK by air, road and sea in 1992. 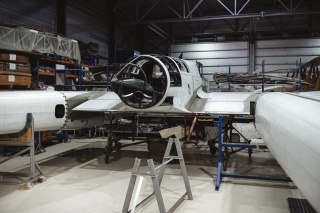 It was obtained by Jim Pearce and the Fw189 Restoration Society in the United Kingdom. The project was stored at Pearce’s farm from 1992 to 2000. A brief attempt to have some components restored by Aero in the Czech Republic in 1995, failed.

Later the center section underwent restoration in Sandtoft (UK) and other parts seem to have been restored by Flug Werk in Gammelsdorf (Germany). The project was even taken up in the British civil register as G-BZKY.

The Fw189 was bought by the late Paul Allen for his Flying Heritage & Combat Armor Museum in Everett (WA) and registered as N189FW in 2008. From that moment on the exact whereabouts of the project were wrapped in secrecy. 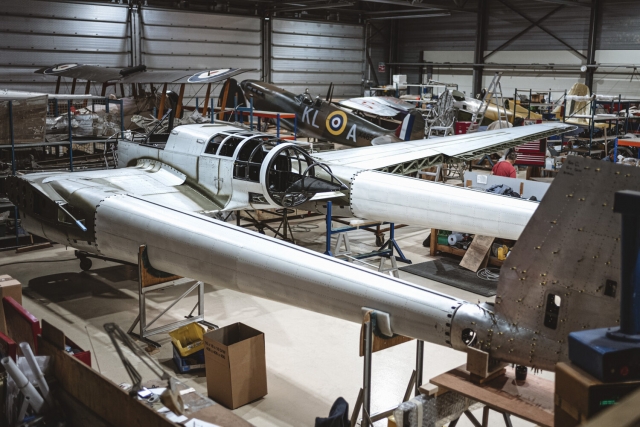 The untimely death of Allen, meant the end of a number of rare restoration projects which, until then, were financed by him. This must have forced ARCO to openly advertise the Fw189 for possible sale.

Despite being a well-kept secret for many years, work on the Fw189 is well advanced. The components of the airframe have attained a various degree of completion, which go from 40% for the forward fuselage to 80% for the fuselage center section and tail booms.

And when you are able and willing to spend USD 1,5 Million you can become the owner of the world’s one and only Fw189. You can have it for static display, or fly it: the choice is yours!