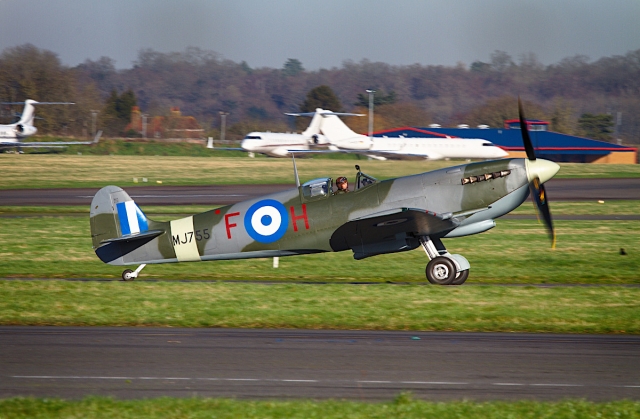 Greek Spitfire on its way home

On 25 May 2021, G-CLGS, a Vickers Supermarine Spitfire LF.IX MJ755 (construction number CBAF-IX-1285) took off from Biggin Hill (United Kingdom), for its flight home. It made a number of stops in Italy including Perugia, Pescara and Lucca-Tassignano and at the end of the second day of its delivery flight it landed at Brindisi, where the Spitfire touched down at 17:35 hrs. LT. On 27 May, the fighter will continue its flight to its final destination via the Greek airports of Corfu and Ioannina. MJ755 is expected to arrive at its new homebase, Athens Tatoi (Greece), by the end of the day.

The fighter has been part of the inventory of the Elliniko Polemiki Aeroporia (EPA, Hellenic Air Force) which withdrew it from service in 1953. It was then stored and later displayed at Tatoi air base. Since 1992, the aircraft has been on static display at the EPA museum in Athens.

Since 2007, the EPA performed the initial phases of the fighter’s restoration to flying condition. For the final phase of the restoration, MJ755 arrived at Biggin Hill on 23 March 2018. The Spitfire is finished in its original EPA colours with code "F-H". G-CLGS is registered to the Icarus Foundation of Pireaus in Greece. Scramble reported earlier on the history of this original Greek Spitfire on its Facebook page