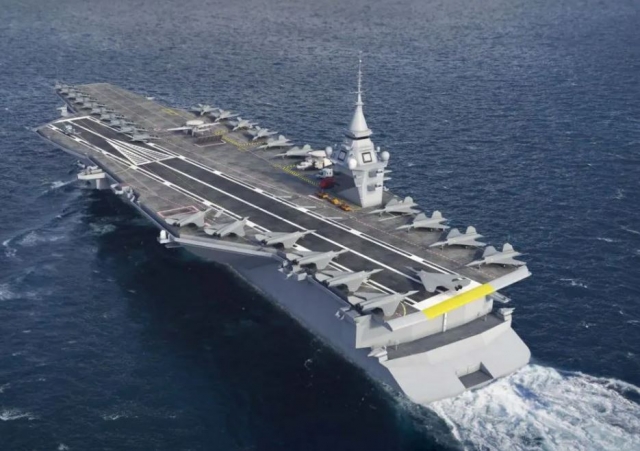 The Marine Nationale (French Navy) will replace the existing Charles de Gaulle by a new nuclear driven carrier around 2038.

The Naval Group/Marine National released some artist impression of the future super carrier. Clearly visible are the Système de Combat Aérien du Futur or (SCAF) or Future Combat Air System (FCAS) jet fighters on deck of the carrier. The PANG will get two K22 reactors (2 x 220 MW thermal) and is said to be cable of housing an air wing with 32 Next Generation Fighters, up to three E-2D Advanced Hawkeyes, up to ten Unmanned (Combat) Aerial Systems as well as four helicopters and up to 1,700 crew (including the air element of some 625 military).

The PANG will be longer and much heavier than the existing Charles de Gaulle, it is planned that the ship will measure some 300 meters in length with a width of 80 meters, a 16,000 m² flight deck and 5,000 m² hangar deck, all together an estimated displacement of 75,000 tons.  This size is nearly comparable with a US Navy super carrier. The PANG will get three ninety meters long electromagnetic catapults (EMALS), developed and built by the USA. The start of the PANG is planned for 2025, with first sea trails in 2036. Commissioning within the Marine Nationale is planned for 2038.