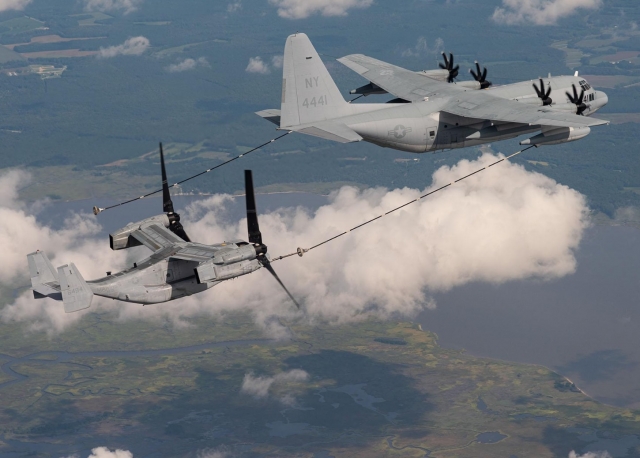 As Scramble Magazine reported earlier, the US Air Force already certified the C-130H with the NP2000 *), but these aircraft are not able to conduct aerial refueling. One would ask what the difference is... well aerial refueling is a critical manoeuvre and airflows behind a tanker aircraft must be carefully studied. This needs a complete different approach in certifying the new eight bladed propeller system.

BuNo 164441 had not flown for almost a year and was scheduled for sundown by the US Marine Corps after the last Marine Aerial Refueler Transport Squadron in New York transitioned to the newer KC-130J models. But the US Navy coordinated with the USMC to transfer the aircraft between inventories and the Tactical Airlift Programme Office (PMA-207) and Fleet Logistics Support Wing completed the required maintenance to bring the aircraft back to life and modified it with the NP2000. This move was of course realised by the increasing needs of aerial refueling capacity with the US forces.

Upon completion of the certification process, 164441 and future AR configured Hercules' will be transferred to the US Navy Reserve, with the Commander Fleet Logistics Support Wing, Fleet Logistics Support Squadron (VR) 62 "The Nomads" ('JW-xxx') this fall to begin its new role. VR-62 currently operates five C-130Ts, all will be modified to the NP2000. The US Navy and US Marine Corps together still have some 35 C-130Ts assigned to VR-53, VR-54, VR-55, VR-62, VR-64, VMGR-452 and the two test units VX-20 and VX-30.

Please have a look to our extensive Air Order of Battles of the US Navy and US Marine Corps at https://www.scramble.nl/.../orbats/united-states-of-america to find out where these squadrons are based.