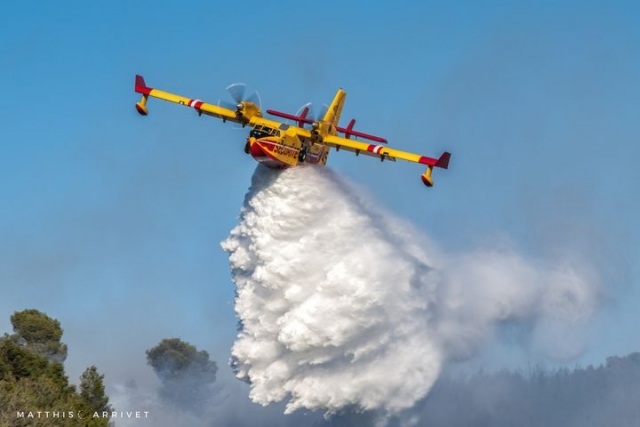 The Southeast of France has already witnessed its first wildfire of 2021 which started on 7 April. Much earlier in the season than usual, a major wildfire started in Monieux in the Vaucluse region, some 60 kms north of Aix-en-Provence. Persistent dry weather and harsh winds have contributed to the spread of the fires.

Around one hundred firemen on the ground were assisted by as much as four Sécurité Civile Canadair CL-415 amphibians and two Bombardier Q400MRs. When the evening fell on 7 April the fire was not extinguished, but yet under control. In the early morning of 8 April the joint effort of ground and aerial firefighters continued.

According to Scramble’s database the French Securité Civile received a total of fifteen Canadair CL-415s, the first of which was delivered in July 1995. Through the years three of these amphibians, locally known as the Pelican, were lost in action. 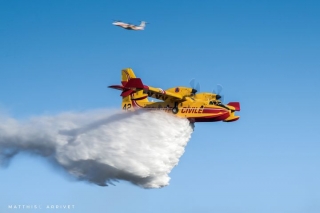 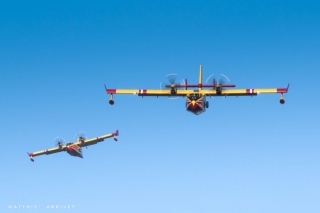 In 2005 two De Havilland Canada Dash 8 aircraft were delivered after a rebuild by the Canadian firefighting company Conair. These Dashes were designated DHC-8-402MR (of multi role i.e. tanker-transport aircraft) Since 2019, three examples of a quick convertible version were delivered, designated as DHC-8-402Q(MR). A fourth aircraft of this new type is expected later this year (Milan 78, now still with Conair for conversion). A fifth and sixth aircraft will follow in coming years. The later Dashes are based upon the NG (New Generation) Q400 and are usually referred to as Dash 8-Q400MRE (Enhanced).

The DHC-8, which is sometimes referred to as Dash, is locally known as the Milan. Sécurité Civile’s fixed wing aircraft are since 2017 based at Nimes-Garons, but can be deployed to other airfields depending on the local situation.

Scramble likes to thank our local correspondent, Matthis Arrivet, for his fascinating photos of the French flying firemen, and Benjamin Kadouch for his useful additions to this post. Merci mes copains!