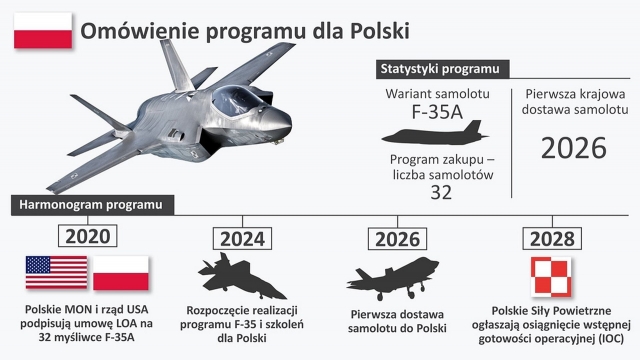 Polish F-35A Lightning IIs will be based at Łask

On 12 february 2021, the Polish Press Agency published an interview with the Polish Minister of Defence, Mariusz Błaszczak, where he said that the Lightning IIs will be based at Łask / 32. Baza Lotnictwa Taktycznego (32.BLT, 32nd Tactical Air Base). This air base is currently the home base for the 10. Eskadra Lotnictwa Taktycznego (10th Tactical Fighter Squadron) operating the F-16C and F-16D Fighting Falcon.

The contract for the procurement of 32 F-35A Lightning II Block 4 fighter aircraft was signed by on 31 January 2020.

Deliveries are scheduled to start in 2024, with the first six aircraft to be based at Luke AFB (AZ) with the 56th Fighter Wing for training of air and ground crews. The first aircraft in Poland is expected to arrive in the 2025-2026 timeframe, with the final F-35As to be delivered before 2030. The Initial Operating Capability (IOC) is scheduled for 2028.

In the interview, Mariusz Błaszczak mentioned that the infrastructure at Łask only needs to be supplemented, not built from scratch. The necessary work is already underway. He had no comments on where the F-16s from Łask will be transferred to. The 21st Tactical Air Base in Swidwin is a good candidate, as this air base is modernized at this moment.